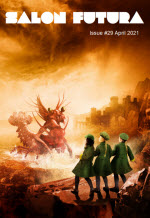 This is the April 2021 issue of Salon Futura. Here are the contents.