Shadow of a Dead God 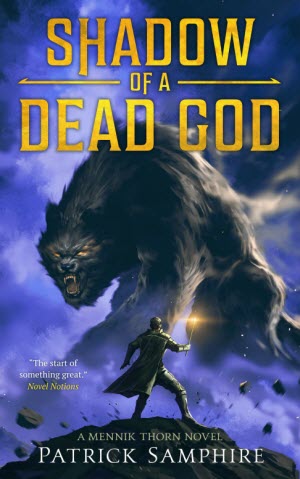 Reading lots of books isn’t always easy. Sometimes you need something to help you along. So instead of going for something heavy and intense, you look for something that will be fun. Tim Pratt’s books tend to do that for me, but I didn’t have anything of his to hand this month so I turned to Patrick Samphire, hoping he would do the trick.

On the face of it, Shadow of a Dead God is fairly classic fantasy. It features a freelance mage in a crime-ridden city fighting against a powerful supernatural threat. But this is not one of those Ye Olde Magick books. The language in which it is written is very modern, and the style is that of a noir detective novel.

Our hero, Mennik Thorn, Nik to his friends, was born in a poor district in the city of Agatos. A small win in the genetic lottery means that he has a mattering of magical ability — nowhere near enough to become a powerful mage, but just enough to not need to look for a more menial job. Nik’s best friend from childhood, Benyon Field (Benny) is in the business of relieving wealthy people of their possessions. It isn’t the best job in the world, but it is the only one that Benny has any talent for.

As the story opens, Benny has just inveigled Nik into helping with a burglary, because he needed help to disarm a magical trap. At precisely the same time as that goes badly wrong, the chief factotum of the Rich and Powerful Mage whose house Nik and Benny are robbing is brutally murdered. Our heroes are arrested on suspicion of doing the dastardly deed.

For Benny this means time as a guest of the City Watch, and a trial. Even if he’s not guilty of the murder, and frankly he couldn’t possibly have done it, he’s still likely to have his hands chopped off for thievery.

For Nik things are much worse. The murder was very clearly a work of magic, so he finds himself in the custody of the fearsome Ash Guard, and elite group of coppers who specialise in sorcerous crimes. Luckily for Nik, he’s clearly not powerful enough to have committed the crime, so he’s let go and has a few days to find out who done it, and to spring Benny from jail.

At this point it becomes obvious that Nik is in over his head. Something very serious is going on in the city, and powerful people do not want him poking his nose into their affairs. Therefore, in the manner of Dashiell Hammett gumshoes everywhere, he keeps getting beaten up and threatened with worse.

There’s a dame. There has to be a dame. In Nik’s case she turns out to be Meroi Gale, the Captain of the Ash Guard. She’s more than capable of looking after herself, and thinks that Nik might be useful, but he can’t trust her very far because she’s a copper and he and Benny are not exactly on the right side of the law.

There are other interesting elements to the story. To start with there is the fact that Benny is the single parent of an 11-year-old girl called Sereh whom Nik is now responsible for, who is the mostly stealthy person he knows, and who has a penchant for very pointy metal things. Plus Nik has a connection to the rich and powerful people of Agatos, which I won’t reveal here because spoilers. Finally there is a pair of errant ghosts that Samphire puts clearly on display early in the story so that, like Chekov’s Gun, they can become vital to the plot when the time comes.

It is all fairly light-hearted, with Nik being a charming combination of rather clever and socially clueless. Nevertheless, the plot gathers pace as the book goes on, and I finished it very quickly. There will be a sequel out later this year, and I’ll be buying it because this first book was just the sort of entertainment I needed.