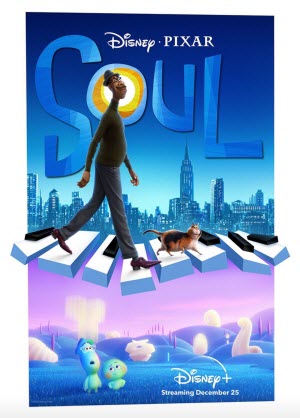 Here’s the first of my looks at this year’s Dramatic Presentation: Long Form Finalists. Soul comes well recommended. It has won Oscars for Best Animated Feature and Best Original Score; and was a Finalist in Best Sound. It has also won BAFTAs and Golden Globes. In fact, it has won so many awards that Wikipedia has created a separate page to list them all.

Yes, of course it is. It is an animation, and animators, bless then, generally can’t resist the opportunity to do something that breaks the bounds of reality.

What Soul isn’t, is about soul. It is about jazz. That’s a bit confusing, but I ran with it.

Joe Gardner is an aspiring jazz musician, but breaking into the big time is tough in New York and for now he has to content himself with teaching music at a local high school. It is about as unrewarding as you can guess. Then, one day, a former pupil calls to tell him that the legendary band leader, Dorothea Williams, is looking for a new pianist. Curley is her drummer these days, and he thinks his old teacher would be just what the band needs. Joe auditions, and gets the job. He’s so happy that he pays little attention while walking home. He falls down an open manhole, and dies.

Or at least, that’s what is supposed to happen. Joe finds himself on a conveyor belt heading for the Great Beyond, but his desire to make it as a jazz musician is so strong that he manages to leap free. He finds himself in the Great Before, the place where young souls go to learn about Earth before being incarnated. It is a bit like a kindergarten and the staff, who are all called Jerry, mistake Joe for a dead soul who has been sent down to mentor their little charges.

Joe thinks he has found a way back. All he has to do is mentor a young soul and, when the kid is ready to be born, steal their Earth Pass and get back into his body. Unfortunately he is paired with Soul 22 who has been in the Great Before for centuries because she has absolutely zero interest in living.

While Tina Fey is her usual amusing self, the star of the show is Rachel House. You may remember her as the grandmother in Moana. In Soul she plays Terry, an obsessive accountant from the Great Beyond who knows that there is a missing soul somewhere; and won’t stop until the books are balanced. Angela Bassett, as the legendary Dorothea Williams, is also very good.

Soul delivers exactly what you would expect. Pixar produces superb animation. Disney provides a script that tugs at the heartstrings. And the Oscar-winning score is written by a couple of lads called Trent Reznor and Atticus Ross. It sounds nothing like a Nine Inch Nails album, which is probably just as well. Reznor and Ross also wrote the score for the Watchmen TV series. It won’t be long now before “kids these days” have no idea that these Hollywood grandees were once in a rock band.

So yes, I really enjoyed watching it, and I’m pleased that Black people’s stories are getting told. I’m a bit stunned that this is the first Pixar film to feature an African-American protagonist. Why would you not make movies about jazz? As to the Hugos, I’m reserving my judgement. I’m hoping that there will be a film that is more than just very enjoyable.