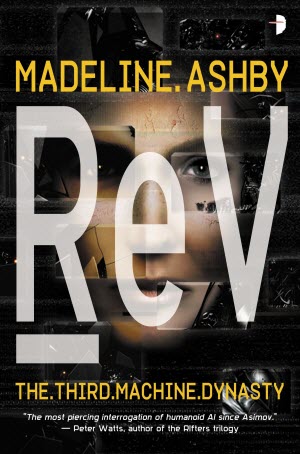 This review is a little late in coming, but then Madeline Ashby took quite a while to produce the third book in the Machine Dynasty series, so I hope she’ll forgive me. As is fairly inevitable, a review of a third book is a series is going to be a bit spoiler-full, so if you haven’t read vN or iD you may want to look away now.

To recap, Pastor Jonah LeMarque, the CEO of the New Eden Ministries, raised substantial sums of money from his followers to build android beings, ostensibly so that those members of mankind unfortunate enough to be left behind after the Rapture have someone to look after them. In fine Asimov tradition they have a programmed Failsafe mechanism that requires them to come to the aid of any human who is being hurt, thus they can never harm a human. These androids are known as vN (short for von Neumann).

The vN come in various types, or “clades”, each designed for a specific job. The nursing clade needs special programming to allow them to do things like administer injections or re-set a broken bone. A vN called Portia works out how to subvert this programming to allow her to harm human.

vN can reproduce. They need to eat for energy, and if they eat too much they become pregnant and produce a clone baby. This is called “iteration”.

Book 1, vN, is all about Amy, who is Portia’s granddaughter. Amy has been raised by her mother and a human husband, who want her to have a proper childhood and live happily among humans. Portia has other ideas.

Book 2, iD, is mostly about Javier, a vN from a clade designed for forestry work, who becomes Amy’s partner as they seek a life away from humans, and to thwart Portia’s various evil plans.

Book 3 is called Rev, which might be short for revision, but could also stand for revolution and revenge. Or indeed reverend.

As the book opens, Amy, Javier and their children are living on the island of Mecha in Nagasaki harbour. This is supposedly a safe haven for vN and humans to live side-by-side. Portia has transcended her body and is now a distributed intelligence living in the Internet, which enables her to kill more humans more easily. Amy has worked out how to patch other vN to disable their Failsafes, and has begun to distribute it so that more of her people can be free from human slavery. But what is a slave to do, when they become free?

The book opens with a chapter set in Hammerberg, a theme park for lovers of that sort of horror story set in mysterious castles in small, mountainous Eastern European kingdoms. Young women who have read too much Twilight can go there and have amazing sex with vN who pose as vampires and werewolves. But there are other entertainments on offer as well. Vampires can be staked, or have their heads cut off. Women from the village can be burned as witches. All of these things involve vN being killed. There is much need for rapid iteration. Can you guess what these vN do when their Failsafes are disabled?

So human governments are desperately looking for a solution to the vN problem. Individually they are far stronger than humans. They can also think and communicate faster. Portia is everywhere. Their only hope is Project Aelph, a secret plan that LeMarque supposedly created to dispose of his creations if they became troublesome. LeMarque, having been exposed as a vicious paedophile, is in prison and well aware of the sudden strength of his bargaining position.

Amy, being Amy, wants to find a peaceful solution to the problem. Portia wants to kill all of the humans before it is too late.

That, then, is the corner that Ashby has written herself into. Now she needs to write her way out of it. That’s a tall order, at least in part because it is hard to escape the conviction that Portia is right. However, Amy has a plan. All she needs to do it manage to implement it before the war between the humans and Portia becomes inescapable.

I will have to leave it up to you, dear reader, to decide whether she succeeds or not. It is a difficult task that she has set herself, and given what she says in the acknowledgements it sounds like she tried several possible solutions before settling on this one. I have a few reservations about it, but I must admit that she came up with a wonderful spanner to throw into the works.

Having said that, the value of this series is primarily in the questions it poses, rather than in the solution it adopts. It is foolish to think that there is a solution to human-vN relationships, any more than there is a solution to human-human relationships. One size does not fit all. What the Machine Dynasty series should do is get us humans to stop and think about how we treat other species, and indeed other members of our own species.