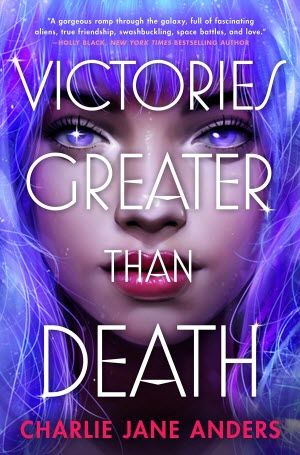 This book marks Charlie Jane Anders’ first foray into YA. I have no idea what actual teenagers will make of it, because it is several centuries since I was last a teenager and tastes have doubtless moved on. What I will say is that to an ancient person like myself, Victories Greater than Death certainly sounds like modern teenagers.

To put it another way, this is what Star Trek would be like if Sylvia Tilly were captain of the Discovery and all the crew were like the team in engineering. It is very much different from the Star Trek I grew up on; but getting away from Kirk’s macho nonsense is probably a good thing.

Anyway, to the book. Tina Mains is an ordinary American teenager, with the usual problems that arise from attending an American high school (minus the vampires, werewolves and serial killers). The only weird thing about her life is that her mom insists that Tina has no father. Instead, Tina is a reincarnated semi-clone of a legendary alien space captain called Thaoh Argentian, and one day her people will come to claim her so that she can once again lead them against the forces of evil.

Also shades of Star-Lord, but we’ll ignore that because Peter Quill is an arse.

Obviously this ridiculous story is absolutely true, and after a couple of chapters the aliens do arrive. Tina and her best friend, Rachel Townsend, find themselves on a spaceship being hunted by evil aliens who are determined to conquer the galaxy. Only Captain Argentian stands in their way.

Hey, this is space opera. Stick with me, OK?

Major Plot Point 1 is that the process of saving and resurrecting Captain Argentian’s soul has not gone according to plan. While Tina now has an encyclopaedic memory of the galactic civilisation, she has none of her predecessor’s memories and is still very much Tina Mains, Earth girl.

Major Plot Point 2 is that this is not a story of good race of aliens v bad race of aliens. The galactic civilisation is strongly multicultural, and the bad guys are rebels against the Queen and her Royal Fleet who call themselves the Compassion. The leader of the rebels, Marrant, was once Captain Argentian’s best friend.

To help make the point. Tina and Rachel have suggested that their new colleagues recruit some of the best and brightest teenagers from Earth to help in the fight. None of the resulting recruits are white. Our supporting cast is as follows.

Damini is girl from Mumbai whose parents are top scientists and who never met a dangerous adventure that she didn’t want to rush head-first into, especially if it involved flying.

Yiwei is Chinese boy who is a brilliant musician and also a keen roboticist.

Keziah is a black, gay boy from England who already has a physics PhD from Cambridge.

Elza is a travesti girl from Brazil and also a genius computer programmer.

Goddess, the retired colonels of fandom are going to hate this.

Anyway, this being YA, there will be a certain amount of romance. I should add that Captain Argentian’s species has three genders.

The aliens have definite air of Galaxy Quest about them. They have silly names such as Yatto the Monntha (who, by the way, is a retired movie heartthrob), and have whacky exclamations such as Cursed Hexapod-Eaters of Jubilation Mountain, or Singing Volcano Fish of Kthorok VII.

Anders is clearly not trying to be serious here, and yet she is, because Major Plot Point 3 is that the book will eventually turn into a mission to discover the truth about the mysterious founders of galactic civilisation, a species known as the Shapers. They, it turns out, were massive racists, and were determined to impose their view of correct sentient life form behaviour on every species that they discovered. And in this case “correct” also meant having two arms, two legs and lateral symmetry. Every other species had to be wiped out.

I wonder of they had a queen called Victoria.

So yeah, much message, but also much sweetness and comedy to sweeten the pill. And, most importantly, the book is eminently readable. I raced through it very quickly, including half an hour after breakfast one day because I was not going to stop until I got to the end.

I should note that the book will have sequels, and that one of the reasons this is a good thing is that some of the team are a little under-used. Yiwei and Keziah in particular don’t get a huge amount of screen time, and Rachel only comes into her own right at the end. But they are a fun bunch, and I definitely want to learn more about them.