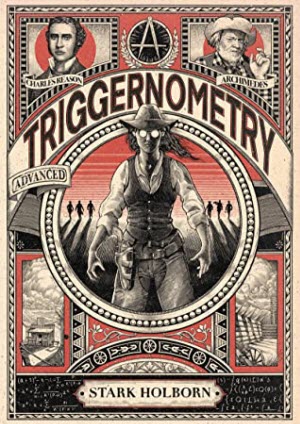 Following their successful train robbery, Malago Browne and Pierre de Fermat have fled across the border where they can live in peace. But their past will catch up with them sooner or later. There are still many mathematicians living in fear and outlawry, and the government that has persecuted them will eventually need to find new people to prey upon.

The plot of Advanced Triggernometry takes inspiration from the plot of The Magnificent Seven (and thus from Seven Samurai). In this case, however, the bad guys are out-of-control lawmen rather than bandits, and the heroes are armed with set squares and rulers as well as guns.

We get to meet a number of new mathematicians. Charles Reason is, very appropriately, running a small town newspaper which doubles as a secret message system for mathematicians. René Descartes is a bit of an arse, but gets a great last line. My favourite is the old guy who speaks only in Greek and has a thing about baths.

What more is there to say, except that if y’all haven’t read Triggernometry then you really should, and if you have then you will almost certainly want the sequel because it provides more of the same.

I have no idea how Holborn manages to come up with this stuff, but if I did I would bottle it, buy a wagon, and go around country fairs selling people “writers’ ideas, guaranteed to help you produce a best seller”.