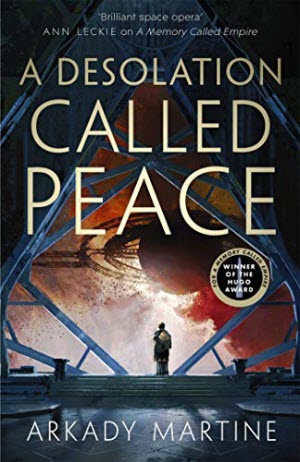 How do you follow up on a stunning debut novel that won a Hugo Award? Well, more of the same sounds like a good idea. With A Desolation Called Peace, Arkady Martine delivers exactly what fans will have been hoping for.

At the end of A Memory Called Empire (what do you mean, you haven’t read it?) Mahit Dzmare, with no little help from what remains of Yskandr Aghavn, and the delightful yet deceptively cunning Three Seagrass, have has engineered a safe transition of power in the Teixcalaan Empire. Nineteen Adze is now Emperor, but she’s only keeping the seat warm for young Eight Antidote, the 90% clone of former Emperor, Six Direction. Meanwhile the Teixcalaanlitzlim have been made aware of the mysterious alien presence beyond the Anhamemat Gate, and hopefully this will keep their military focused on external threats, rather than needed to cook up internal “peace keeping” activities to keep them occupied.

At least, that was the plan. It is what Darj Tarats, Councilor for the Miners on Lsel Station, wanted to happen. What Tarats doesn’t seem to have considered is that a galactic war being fought out near Stationer Space will mean large numbers of warships going to and fro. Also there is always the possibility that the Teixcalaanlitzlim might lose.

Mahit, mission accomplished, and with too many complicated relationships resulting from it, has returned home to Lsel. Unfortunately her homecoming has not been as simple and welcoming as she had hoped. Several of the Councilors are still keen to use her to do whatever they can to keep Lsel free from Teixcalaanli control, but all of them have their own agendas and different ideas as to how to go about this project. In particular Aknel Amnardbat, the Councilor for Heritage, wants to know what happened with the sabotaged imago machine that she had placed in Mahit, and of course she wants to make sure that no one else ever finds out that imago machines can be sabotaged, let alone that someone has committed such sacrilege.

Following the failed coup led by One Lightning, Her Brilliance the Emperor gave the job of yaotlek of the fleet to a promising starship captain called Nine Hibiscus. However, fighting an alien civilization is proving a very different prospect to restoring order in rebellious provinces. Nine Hibiscus quickly discovers that her foe has technologies that are unfamiliar and give the aliens a significant advantage. What’s more, she can’t negotiate with them, because their only audible communication takes the form of seemingly random screaming noises that cause her crews to vomit if they listen to them for too long. In desperation, she calls on the Ministry of Information for help. They might be mainly spies and propagandists, but communication is their job. They should be good at it.

Enter Three Seagrass, who is in a deep funk having lost her best friend, Twelve Azalea, during the failed coup, and because she is pining for the mysterious Stationer Ambassador, with whom she has to admit she has fallen deeply in love. A mission with the fleet with bother get her away from her desk, and give her an excuse to requestion the assistance of Mahit, who is after all a brilliant linguist, and whose home is conveniently on the way to the front. All she has to do then is work out how to communicate with a race of homicidal aliens who are currently whipping the arses of the Empire’s finest fleet. Easy, right?

Three Seagrass is one of my favourite characters in recent science fiction. She is such a glorious mess.

Meanwhile, back on the Jewel of the World, Eight Antidote has decided that it is time he learned a bit about the job of being Emperor. After all, he is fourteen now, almost an adult. It doesn’t occur to him that he’s been kept closeted in the Imperial Place for all of his life, and in practical terms his understanding of the world, and even the city, is much younger. Naturally various power factions within the Empire are seeking to befriend the young heir; and draw him into their influence. The war, and its fallout, will be useful tools in such campaigns.

There’s so much wonderfully sophisticated politics in these books. I am so pleased that the first book did so well, and I’m sure this one will be equally well received. (The UK edition has a cover sticker claiming that the book is a Clarke Award finalist, but I’ll be surprised if that’s true yet because the long list hasn’t been announced, so they are probably referring to Memory rather than revealing inside knowledge. It is also typical of UK publishers that they would rather celebrate being a losing finalist for the Clarke than being a Hugo winner.)

Finding a way through the puzzle that she has created is inevitably challenging, but Martine copes admirably. That she chooses to pick up one of my favourite ideas for an SF novel in order to do so, and implement it splendidly, is an extra bonus.

Sadly this series was always planned as a duology, so it is by no means clear what Martine will do next. She may produce more stories in the same world, but featuring different characters. Or she might do something completely different. Either way I will buy the next book, because the first two have been superb.