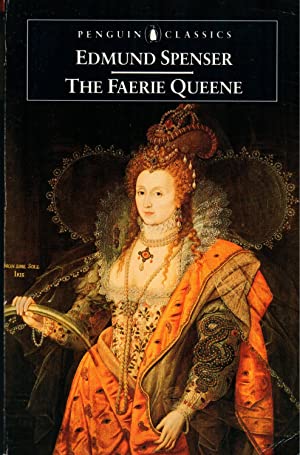 I should start by noting that this is by no means a full review. The Faerie Queene, by Edmund Spenser, is an epic poem written in Elizabethan English. It is one of the most studied works in the English language. Someone has probably written a book about the books that have been written about it. I couldn’t do a proper review without taking in at least some of the scholarship that has been produced about it over the intervening 400+ years since it was written.

However, I have been dipping into it recently because I need to understand something about Elizabethan attitudes to sexuality and gender for a talk I will be giving in February. What I found was interesting to me, and I thought that you might find it interesting too.

It doesn’t help, with regard to understanding the text, that the story is deeply allegorical on several levels. It may well be that the text is deliberately confusing because Spenser wanted to criticise Elizabeth for some things (most obviously her lack of an heir) whilst retaining his head.

Book 1 features a chap called the Red Cross Knight, who very obviously represents England but is also the Knight of Holiness. In his story he is required to choose between Una, his One True Love, and Duessa, an Evil Sorceress. Very obviously Una represents Protestantism while Duessa is Catholicism. Whereas Una is genuinely beautiful, Duessa’s beauty is revealed to be an illusion and she is “really” an ugly hag with dry, saggy breasts and deformed genitals. It reminds me a lot of the way that anti-trans extremists talk about the bodies of trans women. They too like to think of the people they hate, not just as wrong, but as duplicitous, ugly and deformed.

Of course there is another level to this. The rival women represent, not just rival churches, but actual women: Elizabeth and Mary Queen of Scots. It is probably just as well that Spenser died before Elizabeth. King James VI of Scotland was unimpressed with this unflattering portrait of his mother, and had the book banned.

The gender content ramps up in Book 3 when we are introduced to Britomart, the Knight of Chastity. Unlike the other knights in the story, she is a woman. And yet she strides through the narrative in full armour doing knightly things, including winning a tournament. While she is a warrior and a princess, she does not have a Gabrielle to be her companion and conscience. Instead she is in love with a male knight called Artegal whom she is destined to marry, because that is the fate of all women, right?

Those of you who have seen me talk about ancient robots may remember that Artegal has a companion, an Iron Man called Tony Talus. Artegal is the Knight of Justice, and Talus has a habit of dishing it out in a manner reminiscent of Judge Dredd.

Through Books 3 and 4, Britomart and Artegal are separated, as must befall lovers in epic poetry. Eventually Britomart discovers that her beloved has been defeated and captured, not by an enemy knight, but by Radigund, the Queen of the Amazons. Clearly a rescue is required.

My guess is that Spenser knew a bit about ancient Athens and was therefore aware that a) the Amazons almost succeeded in sacking the city; and b) that Athenian women were forced to stay at home spinning and weaving while their menfolk lounged around the Agora having Great Thoughts. Why do I think this? Because Radigund has captured many knights, has dressed them in women’s clothing, and has put them to work spinning and weaving. It is, I like to think, what Antiope would have done to Theseus and his thugs had her army been able to storm the Acropolis.

Unfortunately for the Amazons, they are not the heroes of this story. Britomart turns up, kills Radigund, and frees the knights, after having expressed due disgust that her man and his mates have allowed themselves to be so debased. Allowing themselves to be ruled by a woman, how could they?

Because in Elizabethan England there can be only one, Britomart takes a dim view of Amazons. Having become their Queen by virtue of conquest, she orders them to lay down their arms and get back to their spinning and weaving as God has ordained. The hypocrisy of her position seems entirely lost upon her.

In researching this I discovered that the Wikipedia entry (viewed Jan 30th) for The Faerie Queene is a hugely embarrassing example of male fragility. While the first four books have extensive synopses, Book V, which features the rescue, gets a single line which doesn’t mention the plot. Radigund is described, not as Queen of the Amazons, but as an “evil slave-mistress”. Someone who knows more about the book than I do needs to update that.

My main take-away from this is that gender politics was very much an issue in Elizabethan England, which is hardly surprising seeing that having a Queen is something that the country had a lot of trouble getting used to. And if you see any dudebros complaining that their fantasy fiction has been ruined by people adding kick-ass women warriors, you can blame Spenser. (Or Homer, but that’s another story.)