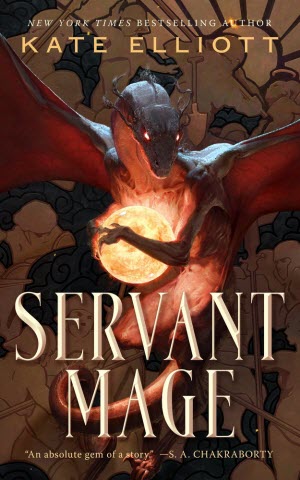 Why yes, this is another Tor.com novella, also edited by Lee Harris. This one is a 2022 release though, so it doesn’t count towards Lee’s Hugo eligibility.

Kate Elliott has made her reputation in the field of epic fantasy, and Servant Mage is an interesting examination of some of the more problematic elements of that genre. Our hero, Fellian, is a fire mage. As such she was placed in an asylum as a child and trained to control the demon inside her that gives her magical abilities. As an adult she has become an indentured servant, required to prove her worth to society.

That society is relatively new. Within living memory, the last Dragon Queen was overthrown by the armies of the Liberationists. The country is now ruled by the August Protector and by adherence to the Eight Virtues of Humility, Obedience, Gratitude, Fortitude, Patience, Thrift, Restraint and Industry. The August Protector is somewhat reminiscent of Oliver Cromwell, and rather more humourless. Meet the new gods, same as the old gods.

Early in the book, Fellian is kidnapped by a group of Monarchist rebels. They need a fire mage for a specific job. They know that her parents were executed by the Liberationists and they assume that she’ll be willing to help them. They do seem to know a lot about magic, and are horrified about how Fellian’s abilities have been hobbled in the asylum.

I should note here that Fellian is not entirely an admirable person. She’s obviously deeply suspicious of her new friends, but she’s also socially awkward. She keeps asking them rude questions, often at inopportune moments. It is possible that she’s supposed to be neurodivergent in some way, though there’s no mention of that and we are left to assume that she’s just clueless.

Anyway, there are Monarchists, and they have a job for Fellian, so she’ll get to be a Hero of the Revolution. Except that Monarchists are, well, Monarchists. They are in favour of Queens and Nobility and all that. They are, of course, what is so problematic about so much epic fantasy. Elliott knows this and does her best to work her way around the issues.

It is not an easy task, and I suspect that when it comes to reviews this book may fall between two stools. Fans of traditional fantasy will side with one faction, while those who despise monarchies will side with the other. I would have liked Elliott to go into the issues in a little more depth, but I am reminded that I could just read Laurie Marks’ Elemental Magic series instead. Having said that, I’m very pleased that Elliott is exploring these issues, and I’m looking forward to finding out what other people make of her attempt.