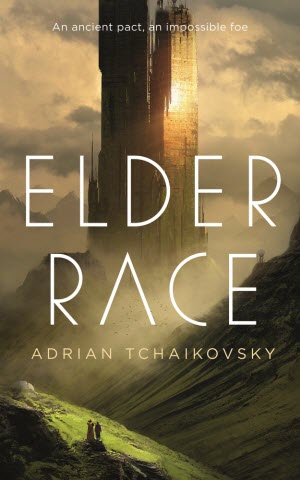 While I’m waiting for the sequel to Shards of Earth, I figured that I should catch up on what else Adrian Tchaikovsky is up to. Elder Race is a novella from Tor.com. It is edited by Lee Harris, which I mention because he placed 7th in nominations for both Editor Hugos last year and y’all need to get to and vote for him this year. The title suggests something from Lovecraft or Warhammer, but the story is anything but.

Things get off to a great start when Tchaikovsky dedicates the book to Gene Wolfe. The short story, “Trip, Trap” was apparently the inspiration for Tchaikovsky’s work. I’ve not read the Wolfe piece, but the similarities are very obvious. Here’s the set-up.

Lynesse Fourth Daughter is unlikely to ever inherit the throne of Lannesite, there being three other daughters ahead of her. This is just as well, because her mother, the Queen, despairs of her. Lynesse is far too interested in ancient tales of glory and adventure, and not interested enough in matters of economics, diplomacy and statecraft. She would make a terrible Queen.

Then comes news that a far-off province is being menaced by a terrible demon. For Lynesse this is finally a chance to prove her worth. She must emulate the deeds of her great-grandmother, Atresse Once Regent, and make her way to the tower of the great sorcerer, Nyrgoth Elder. If there is a demon to be fought, an adventuresome princess and an ageless sorcerer are surely the queendom’s only hope.

Nyr Illim Tevitch is not ageless, though he is very heavily augmented and spends much of his time in cryosleep. Nor is he a sorcerer, though he does have access to have technology far beyond the understanding of the people of Sophos 4. His actual job is anthropology. He and his colleagues were sent here to study how the society of the lost colonists had evolved in the long centuries that they were out of contact with Earth. They were, of course, firmly forbidden from interfering with the local culture.

However, contact with Earth became irregular and Nyr’s companions headed for home, leaving him to hold the fort. It has been a long time, and Nyr has been tempted. Most specifically by the beautiful and charismatic Queen Regent, Atresse, who came to beg his help against the evil sorcerer, Ulmoth, and his monsters. Ulmoth had found a cache of ancient technology and figured out how to command some of it. Given that this was already interference, Nyr agreed to ride out with Atresse and do battle with the enemy. Job done, he reluctantly went back to sleep again.

Now a new visitor has come to Nyr’s tower. She looks so much like the one true love of his life, and she wants his help on a similar quest. But this new threat sounds nothing like technology that Nyr understands. Should he agree to help her? Will be able to? Therein lies our story.

As you can see, it is very Gene Wolfe. However, Tchaikovsky makes the concept his own. I can’t imagine Wolfe ever writing something like this:

I’ve never cared about religion, aside from as a subject of study in others, but in my blackest pits of despair I always find God and call out for help, because only an omnipotent outside force could possibly move the stone that is pressing me down. And God walks away, single footsteps off into the collective unconscious. He doesn’t care. Why should he? I wouldn’t.

Elder Race is in part a science fiction mystery. What is the demon, and can Nyr defeat it? But it is also a story about a man who is very old, very alone, and starting to believe that he is the last of his race. He has also been persuaded to abandon the basic tenets of his profession. He could live for millennia more, if he chose to do so, but what does he have to live for?

Mashed together, these two themes make for a very satisfying short book. While Wolfe might not have approved of Nyr’s take on religion, I think he would have liked the solution that he comes up with for defeating the demon. I really enjoyed this book. I suspect that some of you will too.