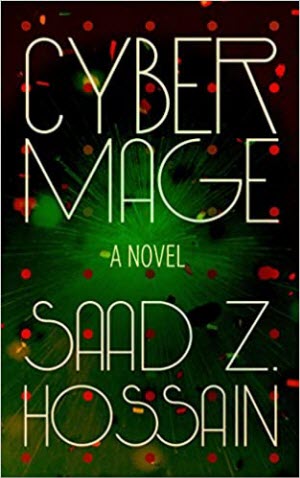 I loved Saad Z. Hossain’s novella, The Ghurkha and the Lord of Tuesday, and was naturally keen to see what he could do with a longer form. I’m pleased to say that Cyber Mage did not disappoint.

The mage of the title is one Marzuk Dotrozi Khan Rahman, and he is a teenage hacker. He lives with his parents (naturally) in the Tri-State Corporation, which is an incorporated region in what was once the city of Dhaka in Bangladesh. Marzuk is wealthy, thanks to his skill with computers, and in particular in the highly popular online game, Final Fantasy 9000. His parents don’t quite understand what he does, or how internationally famous he is. But Marzuk is about to have a rude awakening, because his family is not alone in not understanding the significance of the online world.

The trouble is that Marzuk is a teenage boy, and when he’s not online in his famous Goblin King persona he reacts pretty much like any other teenage boy does. Which is how he has ended up falling head over heels in love with Amina, who knows nothing about the online world. In order to win her heart, he might have to do the unthinkable and actually attend school.

As you can see, there is a comedy element to the book. Poor Marzuk doesn’t quite realise that his sedentary lifestyle hasn’t best equipped him for wooing the most beautiful girl in his age group, but this is not how Cyber Mage starts. There is something much more serious going on.

The book has a prologue, and in it an artificer called The Dragon is called upon by a powerful Djinn called Bahamut to make a magic sword and a golem. Bahamut’s purpose is unknown, but a former street thug called Djibrel is soon spreading fear in the less salubrious parts of Dhaka, having acquired a rather impressive sword and taken to assassinating members of the city’s underworld.

“What the hell are djinn?”
“Spirits, sir. Like fairies, but more litigious. Allegedly.”

Naturally these two storylines will come together at some point. When they do, the stakes will be much higher than a mere fantasy realm, and yet a significant proportion of the action will be played out inside Final Fantasy 9000. Hossain dedicates the book, “This one is for my gamers,” and I can see why.

There’s not a huge amount more than I can tell you without undue spoilers. If you like cyberpunk, you are going to love this book. If you don’t understand computer stuff then you will probably hate it in pretty much the same way that the jocks and their girlfriends at Marzuk’s school hate him.

Reality, unfortunately, is about more than just winning at sport, or whose selfies get the most likes, or even who has the most powerful character in an online fantasy world. Reality also involves swords and mecha-armour and drones and rogue AIs and the ability to call down a precise missile strike from orbit. Reality also involves Djinn, and there is a reason why they often resemble the gods of the ancient world. It is not the sort of thing that a 15-year-old boy is supposed to have to deal with, but just possibly the cunning and ruthlessness required to get to the top of the heap in Final Fantasy 9000 has equipped Marzuk with just the education he needs to survive.

And that would be all there was, save for the small matter of the world that Hossain has created. It is, in a way, a paradise.

This was universal healthcare all rolled into one. The PMD [a personal medical device that all humans were required to have implanted] had a secondary role producing beneficial nanotech, invisible spores released into the air, the duty of every human to keep up the good fight.

Forget the Matrix. Humans have no great value for their computing power. They have some value, however, as biological factories. Corporations need a large human population in order to produce the nanotech devices that they need to keep the Earth habitable. It is a lovely, if rather horrific, idea, and I want to read more of Hossain’s books to see what else he does with it.

And for the Djinn, of course. Always the Djinn.