Well, this is delightfully bonkers.

Rita Indiana is the pen name of Rita Indiana Hernández Sánchez. She hails from the Dominican Republic and in addition to being one of the Caribbean’s foremost writers she’s also a singer-songwriter with her own band, Los Mysterios. Her novel, La mucama de Omicunlé, won the Grand Prize of the Association of Caribbean Writers in 2017, the first Spanish-language book to do so. Tentacle is the English translation of that book, and her first work to become available in English. The translator is Achy Obejas.

The tentacle(s) of the title belong to Condylactis gigantea, the Giant Caribbean Sea Anemone. Being an anemone, it hunts by use of stinging cells (nematocysts) on its tentacles. The venom is poisonous. Given that this is a big anemone, it can be dangerous to humans.

Our story begins in 2027 at which point the Caribbean is an ecological disaster zone. We first encounter Acilde, a young trans man who will do whatever is necessary to get hold of a shot of Rainbow Bright, a legendary new drug that performs gender reassignment without the need for surgery. His quest leads him to become a maid to Esther Escudero, President Bona’s spiritual advisor. She has foreseen that the seas can be saved through the intervention of an avatar of the orisha, Olokun, who, if you remember my review of David Mogo: Godhunter, is genderfluid.

The plan involves psychic time travel, both for Alcide and for Argenis, a brilliant artist who has had the misfortune to be born into an era when anyone with money, contacts and tech can become a famous artist without any drawing skill. It doesn’t help that by the time he enters our story Argenis is addicted to both coke and sex.

There’s not a lot more to the plot, except that it involves pirates (obviously). The book is a novella and a quick read. There’s a lot in there about art theory that went totally over my head, and will probably only make sense to someone who has been to art school. There’s also a fair amount of music, especially the divine Donna Summer. There’s not enough Jacques Cousteau for my tastes, but I don’t expect any of you to be actual fans of real tentacled monsters from the ocean depths.

I should note that Acilde does not come across to me as a convincing portrait of a trans guy. Interestingly Indiana doesn’t really try to get into that piece of his head, even though much of the book involves deep dives into the personalities of the various characters. However, it is clear from what I’ve read that Indiana is deeply involved in the queer community of her part of the Caribbean so I’m sure she knows local trans guys. I also know that trans identities are deeply culturally contextual.

Oh, and if the juxtaposition of a trans person and time travel reminds you of something, the answer is “yes”.

Anyway, this is a great little book, and I’m rather sad that I came to it too late to nominate it for any awards. 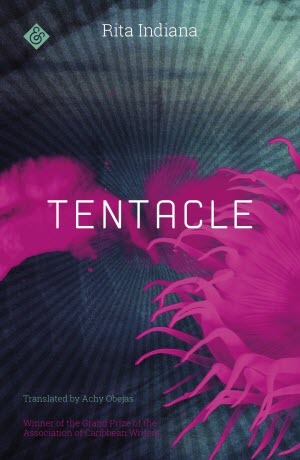