We are in Lagos in the near future, and the gods have fallen to Earth.

That may bring to mind Aliette de Bodard’s Dominion of the Fallen series, but the gods who have arrived in Lagos are very different from the Biblical demons that haunt Paris. They are Orisha, the gods of West Africa. You may be familiar with some of their incarnations from North American Vodun, but these are the originals. This is a new thing in Western-published fantasy. This is David Mogo, Godhunter.

Your immediate question should be to ask what the author knows about West African religion. Well, his bio says that Suyi Davies Okungbowa lives in Lagos, so I’m guessing that he knows a damn sight more about it than I do. This also means that he knows the territory. The book has an awareness of local geography and politics that you would not get from a carpetbagging Western author.

So who is David Mogo? Well, he’s an orphan, and a demigod. He was raised by a wizard whom he calls Papa Udi, though the man is clearly not his father. His mother, he has been told, is a goddess. He’s inclined to believe that because he has abilities far beyond those of mortal men. He makes use of those abilities to earn a living. Many of the minor orisha are harmless and rather foolish. They get lost, or wander way from the part of Lagos in which they live, causing problems for their human neighbours. The police are useless, so David has a consultancy business rounding up stray godlings and taking them back where they belong. He is the orisha ‘daji, the god hunter.

That, in a city whose economy has been wrecked by the arrival of a bunch of vagrant supernatural beings, is probably the best he can hope for. He’s well paid when he has work, but it is intermittent, and he has to deal with the corrupt police. Then a powerful wizard offers him a massive fee to kidnap two of the higher gods: the Ibeji twins, Taiwo and Kehinde. David knows this is a mistake, but he can’t afford to turn the job down.

The plot develops from there. The book has something of the feel of a fix-up. David conquers one opponent, only to discover that he now has to fight someone even more powerful, and so on. There is an overall story arc of his hero’s journey, but the structure does feel a little repetitive and predictable. There’s an interesting contrast to be drawn between David’s story and that of Thor in the Marvel movies. Thor begins as a powerful warrior and slowly adapts to being an ordinary guy. David goes in the other direction, eventually meeting up with his mother as anyone who has read a few fantasy novels knows that he must.

The most interesting thing about this book is the handling of the orisha. They are a pantheon that will be unfamiliar to most readers, and the cultural attitude towards gods in West Africa seems somewhat different from what we are used to in the West. Yes, they are worthy of worship, but also they live alongside us. I did at one point think that Okungbowa was going to reveal that his gods were some sort of alien species who have recently arrived on Earth, but no, they really are gods. It is more like they have arrived from a different dimension.

There are many ethnic groups making up Nigeria, let alone the whole of West Africa. The specific pantheon that Okungbowa is working with is Yoruba, but some of the gods he mentions are worshipped elsewhere too. This causes interesting problems. As we know, gods acquire power from being worshipped. But what happens to a god when two rival groups of worshippers both claim him? It gets complicated.

It is entirely possible that Okungbowa has played fast and loose with some of the mythology. I was pleased to see him naturally use non-binary pronouns for the sea god, Olókun, who is canonically multi-gendered. One of the other gods may have been given a gender swap.

One thing that does work very well is Okungbowa’s use of what I assume are traditional Nigerian witchcraft rituals. These are how the orisha have always been dealt with by humans, and those methods work just as well now that the gods are living next door. The techniques are a little reminiscent of how characters in a Tim Powers novel might deal with ghosts, but there are references to actual herbs that I assume are from traditional recipes.

The book works well as a traditional male-centred urban fantasy. One of the blurbs characterises it as “A Nigerian Harry Dresden”. But personally I found the orisha much more interesting than David and his hero’s journey. I’d like to see more of them, get insights into their characters and so on. There must be plenty of stories about them.

Of course there may be issues with that. I remember from my time in Australia how badly the Aboriginal community reacted to white people wanting to use their religion as a basis for fiction. Worship of the orisha may well be a living religion in Nigeria, and if it is some people might be deeply offended by fiction using their gods. I will have to leave that to Nigerian people to comment on.

The other thing that struck me about the book is that, although it is essentially a story about a war in heaven, and of a young hero playing a crucial role in that war, it is not a book that glorifies combat. There are occasional references to the Nigerian Civil War, and to Boko Haram. Nigeria is a country that has first-hand experience of being fought over. It knows what war is really about. That’s a lesson that we in the West badly need to re-learn. 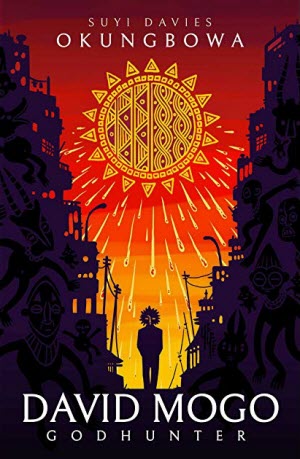