The Light of Impossible Stars The final books of trilogies are often nervous-making experiences because you so much want the author to round off an intriguing story in a satisfying manner. For me that was doubly true for Light of Impossible Stars because Gareth Powell is a friend and I want him to do well. Thankfully he seems to have pretty much nailed it.

The first thing I should say about the book is that it is very readable. I sped through it in a day while traveling home from Austria. The book kept my attention throughout, which is an excellent sign. I was engaged with the characters, and I wanted to know how the story would pan out.

For fans of the series, I should note that there’s rather less of Trouble Dog and Nod the Druff in this book than they might have hoped. They are well-loved characters, and of course Chapter 49 of Fleet of Knives has passed into legend. As I expected, the Druff do have an important art of play in the dénouement of the series. However, the stakes have got incredibly high by the end of the series and there’s not much that individuals can do, unless they have god-like powers.

Of course, this is space opera, so that isn’t entirely out of the question.

There will, I think, be more in-depth articles written about how well Powell deals with the themes of the series. In particular, for a set of books that was supposed to be set after a major war, it has an awful lot of war in it. Personally I’m still digesting everything and not really in a position to come to a conclusion. For most readers, however, what will matter is that the series has come to a satisfying ending. Powell is probably keen to get onto new projects. What he’ll find is his fans clamouring for more books featuring the Druff. 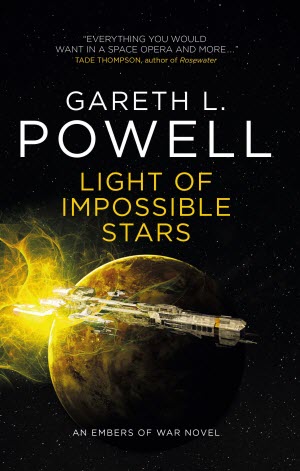