Embers of War / Fleet of Knives 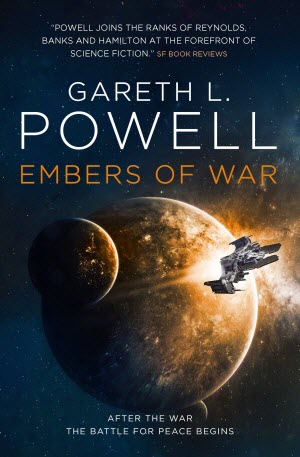 I missed reviewing Gareth L Powell’s Embers of War when it came out, but now that I have read Fleet of Knives as well I figure I can do both together. Ideally, perhaps, I should do the whole trilogy, but that would mean a longer wait and Gareth wouldn’t thank me for that.

It was perhaps inevitable that, with the sad death of Iain M Banks, the publishing industry would be looking for a new King of Space Opera. Lots of people would love that crown. Gareth has made a pretty good pitch for it.

If you listen to Gareth talk about the series, one of the things he often says is that most space opera focuses on things like interstellar war, but he wanted to focus on what happens after the war is over. The aptly titled Embers of War therefore begins three years after the end of the Archipelago War. Two of the primary characters of our story are war veterans.

First up we have Captain Annelida Deal. She was the commander of the Conglomeration Navy forces at the battle of Pelapatarn, the engagement that ended the war. The Outwarders had perhaps felt themselves safe hiding deep within the vast forest of giant, sentient trees that covered the planet. Captain Deal’s superior officers thought differently, and they were not taking chances. If in doubt, nuke ‘em from orbit, it is the safest option. Even if it does mean obliterating an entire planetary ecosystem.

In the outrage that followed the atrocity, the Conglomeration government made Captain Deal a scapegoat. Fortunately space is a very large place and she has managed to disappear and re-invent herself. She hopes that she can stay that way.

The Trouble Dog was not involved in the destruction of Pelapatarn, though several of her pack mates were. As a Carnivore Class warship, she is one of the most deadly fighting machines that the Conglomeration is able to field. Naturally she is run by a top class AI. Following the war, Trouble Dog elected to resign from the Navy and sign up with the House of Reclamation, a galaxy-wide rescue and salvage company whose only mission is to save those in trouble. Her new captain, Sal Konstanz, is good hearted and brave, but not convinced that she is leadership material.

No space opera is complete without a certain amount of Gosh! Wow! factor. In Embers of War that is provided by The Gallery, a solar system that has been turned into an art installation by a long-lost civilisation. No one knows who built it, or why they decided to sculpt the planets into such beautiful and unusual shapes. 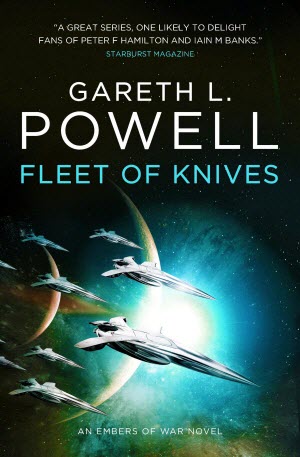 By the end of the first book, Sal and the Trouble Dog have discovered another relic of the builders of the Gallery. The Fleet of Knives is a vast fleet of marble-white, dagger-shaped warships run entirely by AIs. Much of the book named after them deals with the consequences of unleashing such a potent military force on the galaxy.

The other half of the story focuses on the attempts of Trouble Dog and her crew to rescue a foolish bunch of chancers who have tried to loot a very old alien starship that has been preserved as an historical relic. The aliens are not happy, but the whole episode also throws light on the reasons why the Fleet of Knives was built in the first place. What would anyone need a fleet of a million warships for, if all you wanted to do with your lives was to make art installations from planets? Along the way, Trouble Dog makes friends with Lucy’s Ghost, a ship that is run, not by an AI, but by the uploaded mind of a human girl whose body had been dying.

There’s a lot of talk about AIs in the series. It is useful to think of how the Culture Minds might see these ships. Trouble Dog they would probably view as on the level of a human child who had been enlisted as a soldier and was still trying to process the experience of going to war and killing people. The Fleet of Knives, on a similar scale, is a nest of very large fire ants.

The other thing that good space opera needs is interesting aliens. Gareth provides us with the Druff. The Druff have blue skin, six arms, and faces in the palm of each hand. They are natural engineers, able to fix anything, and have therefore made a niche for themselves on human-owned ships. Nod, the Trouble Dog’s engineer, is probably the most interesting character in the books.

The theme of the series, as should be fairly obvious, is the question of how to keep the peace in a dangerous galaxy. Most people, even most soldiers, don’t want war. But if danger is out there, who is to oppose it? And how much force is it acceptable to apply to do so? Trouble Dog and Captain Deal are probably far too damaged to provide answers. Sal Konstanz tries to provide the moral center of the story, but lacks the self-confidence and experience to do so. My guess is that in the end it will be down to Nod and the other Druff to fix things. After all, fixing things is what Druff do.