Trilogies seem to be something of a theme in this issue. William Gibson is in the middle of one; Gareth Powell has finished one; and here too is another book, three. The Red Abbey Chronicles, however, have a rather different structure to the other two.

Both Powell, and presumably Gibson, have a single narrative thread running through the series. Maria Turtschaninoff has tried something different, which may have saved her from Middle Book Syndrome. After the first book, Maresi, we were all expecting the continuing adventures of the titular heroine. However, with Naondel Turtschaninoff chose to go back in time and tell the story of the founding of the Red Abbey. Red Mantle picks up the story of Maresi once more as she returns to her homeland, proudly wearing the red cloak of a priestess.

There are two main issues to be resolved in the book. The first is how well Maresi will get on with her avowed plan to start a school in her home village. It is, after all, a place where no one else can read, let alone write. It is a place where most people are kept much too busy just growing food, making clothes and staying one step ahead of the local lord’s tax collectors to do anything else.

The other is how Maresi will come to terms with the events of the first book. When she arrived at the Red Abbey she had no expectation of becoming a priestess of the Crone, let alone having to use that connection and the power that came with it to save the Abbey from a large group of very violent men.

Like the first book, this one is a slow burner. The first two thirds or so are simply Maresi dealing with everyday problems. Her neighbours think schooling is pointless. Her mother is upset that she won’t braid her hair like other village girls. Everyone wants to know which boy in the village she is going to marry. Slowly but surely, however, menace rears its ugly head, and by the end of the book Maresi has had to deal with a major crisis once more.

Being intended for teenage girls, the book is a very easy read. However, it does not shy away from difficult topics. There is mention of contraception, rape, the dangers of childbirth, and pressure to conform to social expectations. The Red Abbey Chronicles books are just full of feminist politics. I am all in favour of this. We need to be teaching young girls about feminist issues, and these books are an excellent vehicle for doing so.

There is also a romance plot, though it is by no means the main part of the book. I was very happy with it, and indeed saw it coming a mile off. That’s because Kevin is from California and Turtschaninoff dropped a heavy hint in Finnish.

Which brings me to the fact that these books are all translated, though from Swedish rather than Finnish. (AA Prime has translated all three books) I understand that the first book in the series is available in 21 different languages, and a movie is in production. I am delighted to see Turtschaninoff have so much success. It is hard getting anywhere when you write in a language other than English, but it is possible, and hopefully that will encourage more people to seek out translated works. 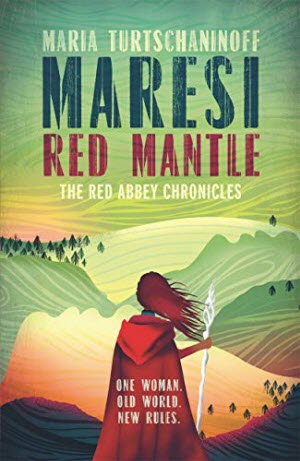