On a remote island in the Northern Seas there is a secret religious establishment. One might call it a nunnery, for it is staffed entirely by women. The Red Abbey, however, is not like any nunnery of our world. In the Red Abbey, even god is female.

Maresi Enresdaughter is a teenage girl fairly newly arrived at the Abbey. She loves the freedom that she has there. She loves the company of the other young women. But most of all she loves books, and wants nothing more than to sit and read all day long. Naturally the older sisters despair of her at times, but perhaps she will make a good Librarian when she is older.

That’s a good enough lure for a YA fantasy novel, isn’t it? Maria Turtschaninoff sure knows her audience. However, our idyllic sojourn with Maresi in the Abbey library will not last forever. As the book opens, another young girl arrives at the Abbey. Her name is Jai, and she is a run-away. The culture that she was born into is deeply patriarchal, so much so that women who don’t follow their men-folk’s orders are liable to be killed to preserve the “honor” of the family. Jai’s mother has managed to get the girl to freedom, but is the Abbey truly far enough away to make her safe?

Jai’s people, of course, are tall, fair-haired and fair-skinned. You had guessed that, hadn’t you?

There’s no doubt which way this story will go. The only question is what sacrifices the women of the Abbey will have to make to fight off the attentions of Jai’s vengeful father and his band of hired killers. While this may be a book written for teenagers, Turtschaninoff doesn’t pull her punches. Maresi, having befriended Jai, and being rather more resourceful than most of her sisters, has to grow up very quickly indeed.

I have several reasons to love this book. One of them is a realistic depiction of a pagan community centered on goddess worship that doesn’t shy away from any aspect of women’s lives. Another is that this is a fast-paced, gripping tale that will have you rushing through it, consumed with anxiety for the women.

It is atmospheric too. I know it is a bit of a hostage to fortune posting passages that you particularly liked, because tastes vary enormously, but I’m going to take risk here:

I heard a rustling around me. In the faint moonlight I saw hundreds of iridescent butterflies flutter up out of the bushes. Their wings look unnaturally large and they shone silver and grey in the soft light. The butterflies seemed never-ending as more and more flew out of the bushes and into the night. I was entranced by the beauty and stayed hanging there, enraptured. It was like a goodnight greeting from the island itself.

When the last butterfly had flown I heard the voice.

Maresi, it whispered. My daughter.

It came from the hole beneath me. She was there, in the darkness. Waiting.

You need to imagine that small piece of speech being in an aged, rasping but firm voice. Then you need to go and listen to The Pretenders’ “Hymn to Her”.

Credit should also go to the translator, A.A. Prime. Turtschaninoff wrote the original in Swedish.

Most of all, though, I love Maresi because it is firmly and unabashedly feminist. It is a book that I would like every teenage girl to read. Sure, there is magic in the book, and it is fiction, but it is full of hope and courage. It suggests that we can make the world a better place, hard and painful though that journey will sometimes be.

It is also the first book in a trilogy. Can we have the next one, please, Pushkin Press? 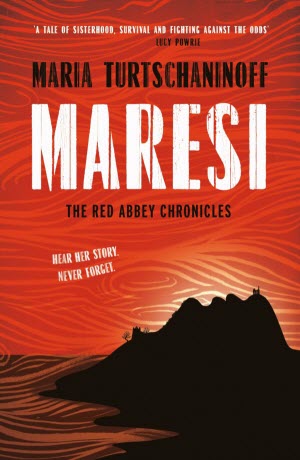