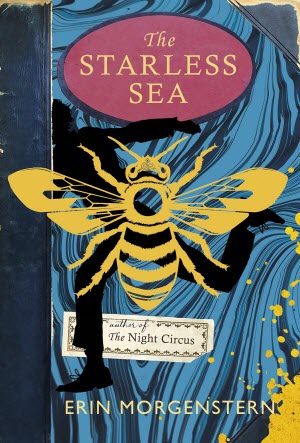 Although I had the new Erin Morgenstern book before last issue, I elected not to try to read it in time. That’s partly because it is long so I wasn’t sure I’d get it finished. But also I didn’t want two books about doors and keys in the same issue. The Starless Sea and The Ten Thousand Doors of January both feature keys on the cover. Both feature heroes striving to keep doors to another world open while enemies try to close them forever. Thankfully there the similarities end.

When I reviewed The Night Circus my take-away was that Morgenstern was brilliant at description and atmosphere, but less good at character and plot. It has been seven years since her last book, and she has definitely learned a lot in the meantime. The atmosphere is still there, the characters are a lot more interesting (though some aren’t human which complicates matters), and there is a plot. More about that later, but first, seven years? Why?

I saw Morgenstern on her book tour which, thankfully, came through Bath. She talked a lot about process during the event. Some writers plot everything out beforehand. Some writers start the story and let the characters guide them. Morgenstern says that both methods sound much too organised for her. What she does is start writing scenes and wait until they coalesce into a story.

There is a pirate in the basement.

The results of this are not always easy for the reader, but if you have patience the end results are worth it. Morgenstern has been very open about the fact that she’s asking her readers to do a lot of work here, and she is. The line above is the opening line of the book. It begins a story about a pirate who is in prison awaiting execution, and a girl who comes to his rescue. There are many such stories scattered through the book. Their significance may not become clear for a hundred pages or more, but you get there in the end.

On page 268 we learn how one of the major characters deliberately bumped into a waitress, spilling a tray of drinks and thus saving the life of another major character whose order had been poisoned. That event is described, in a throwaway line and as an accident, on page 45. Morgenstern expects us to remember. You don’t have to pay attention as much as you do when reading Gene Wolfe, but you do need to stay sharp.

This has some effect on the pace of the book. With The Ten Thousand Doors of January we switch between viewpoints as Alix Harrow takes us through two stories that will meet up eventually. This is a classic technique. You keep reading because both stories have momentum. With The Starless Sea the main story is intercut with one-off tales, or chapters of a seemingly unrelated story that ends fairly quickly. You have to trust that it will all make sense eventually. And it does. By around halfway the plot gathers momentum and the switches are now between different viewpoint characters, just as we have come to expect. If you are finding the book slow, hang in there. It gets faster.

So there is a plot. Here it is. Zachary Ezra Rawlins — always Zarchary, never Zack — is the only son of a fortune teller, Madame Love Rawlins. As a boy he once saw a painting of a door on the wall of an alleyway. It looked just like the sort of door that would lead to a mysterious magical kingdom, but Zachary was a sensible boy and he did not try to open it. The next time he passed that way, the door had been painted over.

Years later, Zachary finds a mysterious book in his university library. It has no author listed, and when he tries to check it out the librarian can’t find it in the catalogue. He takes it back to his room to read, and in it he finds a story about a young boy who finds a mysterious painted door on an alley wall.

Being now the curious sort, Zachary investigates, and so he finally finds his way to The Starless Sea and its Harbor. But what he finds is far from the idyllic magical realm that the book, Sweet Sorrows, describes. There have been changes. The Starless Sea is a world of story, and stories never stay the same for long.

In the meantime there is the story of Zachary Ezra Smith to unfold. Will he manage to avoid the mysterious secret society that wants him dead? Will he manage to leave The Starless Sea and return to his friends and family? Will he be changed if he does?

Along the way, the two books this reminded me of most were The Magus by John Fowles and Foucault’s Pendulum by Umberto Eco. It is not either of those things, but there are times when it very easily could have been.

Zachary’s tale is the story that most people will read, and it is a good story. It also has gay stuff in it, which will make a lot of you happy. But it is not all that there is to the book.

Reading a novel, he supposes, is like playing a game where all the choices have been made for you ahead of time by someone who is much better at this particular game.

That’s from page 16, and it sets out early on Morgenstern’s philosophy of fiction. It is the philosophy of the role-playing generation, of the fan-fic generation. Those who want stories to stay the same, to stick to canon, are closing off doors. Morgenstern wants to encourage us to keep them open.

This is not where our story ends, he writes. This is only where it changes.