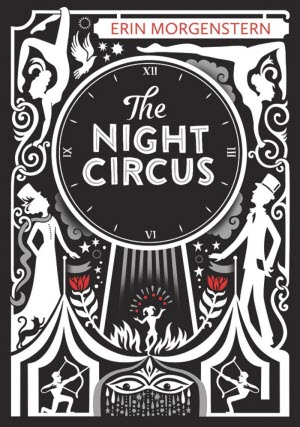 There are plenty of people out there who absolutely love Erin Morgenstern’s debut novel, The Night Circus. There are others who think it is massively over-rated. I can see where both sets of people are coming from, and indeed I vacillated between the two views rather a lot when reading the book. How can a book have that sort of effect on people? Here’s a challenge for a reviewer.

The starting point has to be that the book is a really beautiful object. The Circus from which the book draws it’s name has a black and white color scheme. The book matches it, with a black and white cover (backed with sparkly silver stars) and dramatic black edging to the pages. Fans of the circus identify themselves to fellow obsessives by wearing all black, or all white, with a single flash of red, often a scarf. The book has a red bookmark, and red boards peeking out from under the black of the cover. A lot of care and attention has gone into the packaging of this object, and I feel very sorry for anyone who bought it as an ebook. Paper still has the edge when the publisher is prepared to go to such lengths to make a book look good.

Coupled with this attention to appearance, the book has some wonderfully evocative and atmospheric prose. I’m sure that there are many experienced authors out there who would love to be able to describe a scene the way Morgenstern can. Here’s an except from one of my favorite chapters. The viewpoint character, Bailey, is a visitor to the circus. He wandered into a tent promising stories and memories. A note at the entrance said, “Please enter cautiously and feel free to open what is closed.” Bailey finds the tent full of glass jars.

He recalls what the tag said about opening things, wondering what could possibly be inside all of these jars. Most of the clear glass ones look empty. As he reaches the opposite side of the table, he picks one at random, a small round ceramic jar, glazed in black with a high shine and a lid topped with a round curl of a handle. He pulls the lid off and looks inside. A small wisp of smoke escapes, but other than that it is empty. As he peers inside he smells the smoke of a roaring fire, and a hint of snow and roasting chestnuts. Curious, he inhales deeply. There is the aroma of mulled wine and sugared candy, peppermint and pipe smoke. The crisp pine scent of a fir tree. The wax of dripping candles. He can almost feel the snow, the excitement, and the anticipation, the sugary taste of a striped candy. It is dizzying and wonderful and disturbing. After a few moments, he replaces the lid and puts the jar carefully back on the table.

There’s a lot of material like that. Morgenstern is a very visual writer, and very concerned with the sensations her descriptions convey. I understand that she’s a painter as well as a writer.

There is so much that you want to love in this book, especially if you enjoy paragraphs like the one above. But a novel needs more. Specifically it needs plot and characters. Here’s the outline.

Two aged magicians, known as Mr. A.H.– and Prospero the Enchanter, are rivals and have been so for almost all their lives, possibly for centuries. Every so often they have a contest in which each trains up an apprentice, and these young people are pitted against each other in test of skill and endurance. This time Prospero has chosen his young daughter, Celia. Mr. A.H.– has chosen an orphan boy called Marco. The venue for the contest is a circus. Each young magician vies to produce more and more spectacular attractions, while continuing to fool the paying public, and most of the other performers, that this is all cunning artifice, not real magic. Celia and Marco fall in love, and complications ensue.

For about three quarters of the book that’s basically all there is. The plot moves at a snail’s pace as we are introduced to the various delights of the circus (all beautifully described) and a collection of mostly cardboard supporting characters. Eventually, in the final quarter, matters come to a head and suddenly you want to keep reading to find out what happens.

At this point I had decided that the book really needed to be a horror novel. Mr. A.H.–and Properso are a thoroughly inhuman pair (the latter someone literally for much of the book), mercilessly manipulating their young charges and casually murdering people who become a nuisance. The true nature of the contest is much more vicious than it is initially described. But the intensity of emotion never seems to ratchet up properly. Even when people die, it is all very understated. Eventually, of course, there has to be a happy ending. The book is really a love story.

The somewhat dreamlike nature of the narrative doesn’t help much either. The book is clearly stated to take place in the Edwardian era, but we don’t see much of real life. We see the circus, and we see a small group of impossibly rich, impossibly talented people who are its owners. Bailey and his briefly glimpsed family are just about the only real-world people in it.

(There is, by the way, one minor Willis-ism. Morgenstern appears to think that trains in the UK are boarded from ground level as they are in the US. But it is a very small niggle and the scene more or less works anyway.)

The main problem for me, however, was the characters. Most of them seem like cut-outs. They have little labels on them detailing their function in the plot. Some of them also have labels indicating feelings. But it never really seemed like they were people with actual objectives and feelings. It is a failing I find all too obvious in my own infrequent attempts at fiction. Maybe that’s why it stood out for me in this book. And it is a real shame because there are some good ideas there. Isobel and Tsukiko are both pivotal characters in the book, and more could have been done with them. Chandresh’s descent into drunken madness could have been much more poignant.

It is possible that Morgenstern is trying to replicate the extreme reserve required in upper class society during the Edwardian era, which would explain why people don’t seem to react the way they should. If so, I see what she was trying, but I still don’t think it works, at least not for most modern-day readers.

All of this may sound like I disliked the book. I didn’t. It took a long time to get into it, but I very nearly stayed up very late to finish it. I can see why so many people love the book. But, as I said at the start, I can also see why it has got a bunch of bad reviews as well. The best I can do is try to explain what the issues are so you can make an informed decision as to which camp you will fall into. For myself, I’m still not convinced it is a great book, but when Erin Morgenstern produces her next novel I will buy it. This one is her first. She shows tremendous talent and promise. Things can only get better from here.