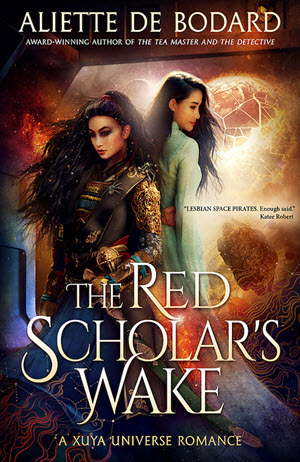 The latest writer to get in on the lesbian space pirates gig is Aliette de Bodard. As you might expect, she has a very different take on the subject.

The Xuya universe has had its share of stories about sentient spaceships before. Previously, however, all of the stories in the series have been of a shorter length. The Red Scholar’s Wake is the first full-blown novel in the setting.

The eponymous Red Scholar is an actual space pirate, and she is a lesbian by dint of being married to her ship. There is, I think, a lot to be said about being a sentient spaceship that has a gender and a sexuality. In this book, however, De Bodard does not go there. I’d say that she has other fish to fry, but given that the ship’s name is The Rice Fish, Resting (Rice Fish for short), that might be indelicate.

As is obvious from the title of the book, the Red Scholar is not just a pirate, she is a very dead pirate. The circumstances of her death form the basis of the plot of the book. Rice Fish is convinced that her wife was betrayed, sold out to their enemy, Censor Trúc, by a rival pirate captain. However, proving that a pirate would betray one of their own to the government will not be an easy thing. Rice Fish needs expert help.

Into our story comes Xích Si, a humble data analyst who is among the captives brought in by the latest wave of attacks by ships of the Red Banner. She appears to have exactly the skills that Rice Fish needs. But Xích Si doesn’t think much of pirates. They have, after all, just killed lots of her friends and destroyed her ship. Also she thinks that killing people is wrong. More to the point, she is a nobody. She has no authority in the pirate community and won’t last the day without protection. So Rice Fish does the only thing that might work. She marries Xích Si.

It is, of course, a marriage of convenience. Everyone agrees on that. But then so was the marriage between Rice Fish and the Red Scholar. The ship has always regretted that. As for Xích Si, she despises pirates. But Rice Fish’s avatar is so extraordinarily beautiful…

Doubtless you can all see where this is going. And in standard romance plot fashion there will be a period in which Rice Fish and Xích Si hate each other before they get back together again. I’d be interested to see a romance expert’s take on the book, because it all seemed a bit formulaic to me. The rest of the book is De Bodard in fine form.

We have the Vietnamese setting, with its emphasis on family and honour, and the profusion of aunties. We have action sequences in which Xích Si races against time to save her beloved and her young son. We have intrigue. And no one is quite what they seem. Xích Si is not the mouse she appears on first meeting her. Rice Fish is not a bloodthirsty criminal. Even Censor Trúc is not the ruthless government agent we expect. Most of the main characters are women, and the one who is not suffers badly from his refusal to accept that women can be competent at anything.

This is a very enjoyable book that asks serious questions about what it means to be idealistic rebels fighting an oppressive government who have to turn to piracy in order to survive.