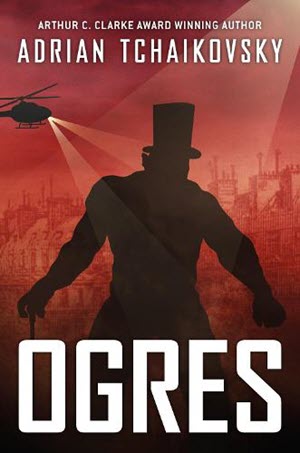 I understand from social media that the flurry of releases from Adrian Tchaikovsky in 2022 is one of those publisher accident things where a bunch of different companies all manage to get their acts together at the same time. Nevertheless, that fact that so many companies want to publish Tchaikovsky’s work is testament to how respected he is becoming. I do plan to read all of this year’s releases eventually (even if that means having to read the whole of the spider book), but I have a lot of other books to get to so for now you are just getting a review of the novella.

Ogres begins as a simple fantasy tale. Our hero, Torquell, is the young son of the village headman. He lives in a mediaeval society where villages are beholden to local lords who are, apparently, Ogres. In the woods there is a group of outlaws who claim to resist the Ogres’ rule, but really they are mostly a bunch of ne’er-do-wells. In a “boys will be boys” sort of way, young Torquell manages to get himself into terrible trouble, and thus his adventures begin.

Before that happens, however, we witness the arrival of the local Ogre on his annual visit to the village. Two things are obvious. Firstly, the Ogres really are very large humanoids. Secondly, they are in possession of technology that suggests at least 21st Century sophistication. And suddenly we are in a science fiction story.

I won’t say a lot more, because Ogres is a short book and I don’t want to spoil it too much. I will say that it is a book that is very much about contemporary UK politics. It is also a book that examines the narrative of the Chosen One who gets to be a hero and a leader of his people. What sort of person is he? And how does he end up in that position?

The final twist will probably blow you away. I know I was completely caught by it. This is a short book. Read it and see if you get the same experience as I did.