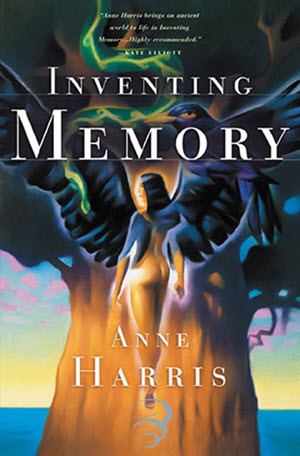 The latest novel by Anne Harris, Inventing Memory, is a meditation on the role of myth and religion in society. It takes place partly in modern day America and partly in the city of Erech in ancient Sumeria, during the reign of King Gilgamesh. The lead characters are Wendy Chrenko, an expert in Sumerian religion, and Shula, a slave girl who rises to become a priestess of Inanna.

We here at the First Church of Ishtar, Newly Revived, express our delight that Harris has chosen to highlight The Goddess and her stories in this way, even if she has chosen to use the old Sumerian name for the Queen of Heaven. We are particularly pleased at how many of the ancient tales have been used in the book. We do note that there are certain theological inexactitudes in Harris’s treatment that, in less enlightened times, would probably have resulted in her being convicted of heresy and sentenced to be torn apart by The Goddess’s pet lions, every day from now until eternity. But one of the advantages of being the Pope of your own church is that you can show magnanimity where necessary. Besides, Harris is a really nice person and I’d hate to have to order her sacrificed in such a potentially messy fashion. And, what is more, by the time we get to the end of the book, she says all of the right things.

But we have to start at the beginning, and that means the Garden of Eden. As with much of Genesis, this story has parallels in Sumerian myth, and wasn’t always as we know it. In particular there is the mysterious figure of Lilith, Adam’s supposed first wife. A garden with a tree, guarded by a dragon or snake, and inhabited by Lilith, appear in a Gilgamesh story. The meaning of that tale is not entirely clear, but I guess Lilith and the snake could have been up to all sorts of tricks.

And from these, in the fullness of time, came people. A new kind of creature that could write laws of its own. And the first law that people wrote was, “Death exists.”

“True enough,” said the snake, and Lili agreed, but before they knew it people were writing all kinds of other laws. Some of them were pretty good, like “Hanging out and talking is fun,” but others, like “Sex is evil” didn’t make any sense at all.

“Well it’s too late now,” said the snake. “They’ll just have to work it out for themselves.”

Harris’ heroine, Wendy Chrenko, is a devotee of what I tend to call “fluffy bunny feminism.” This is the idea that if women were in charge of the world all would be sweetness and light and there would be no nastiness, ever again. It is generally accompanied by a belief that in the dim and distant past there was a time when a matriarchal fluffy bunny society existed, The Goddess was worshipped, and all was right with the world. This Eden-like paradise was destroyed by the invention of patriarchy, and we have gone downhill ever since. You can see the attraction of the Eden and Lilith myths to people who believe this sort of thing.

Shula, on the other hand, lives in the reality of ancient Sumeria. Although Inanna is worshiped fervently (indeed she is the patron Goddess of Erech), there is already a King (Gilgamesh) and Inanna’s position in the divine hierarchy is by no means pre-eminent. Wendy and her feminist pagan friends have this daft idea that they can somehow search even further back and discover the fluffy bunny garden, thereby putting the world to rights. In the process of trying to do so, they learn some very different lessons, including that even fluffy bunnies have teeth and are liable to bite.

Shula tipped her head back to peer at Belili. “Will you be my guardian?” she asked.

“Yes, certainly, if you will remember that you were not always a slave.”

“But how can I? My life before I came to Erech is a murky pond, and I have no net or line to draw up what might be in there.”

“If you cannot remember, invent. Make up your own story.”

There are, I think, a few flaws in Inventing Memory. Some of the characterization is a little stereotyped, although I guess some of that can be forgiven because Harris is talking about myths so she wants stereotypes in the story. On the other hand her portrayal of the unpleasantness of school life is particularly good so I’m not going to complain much.

More importantly, she gets the philosophy right. There never was a fluffy bunny garden, nor can we create one. On the other hand, myths are simply ways in which we try to help order our lives. As Joseph Campbell explained [in Myths to Live By], we can create new ones. And the myths of the past contain many useful elements. Patriarchal religion is neither inevitable nor healthy, and we need to get rid of it. Taking the better ideas from times when goddesses were worshipped is a good start. Anne Harris’s book is, in its own way, a neo-pagan manifesto, and as such I highly recommend it.

(By the way, for information on how to become a Pope, search the Web for entries on Discordianism.)