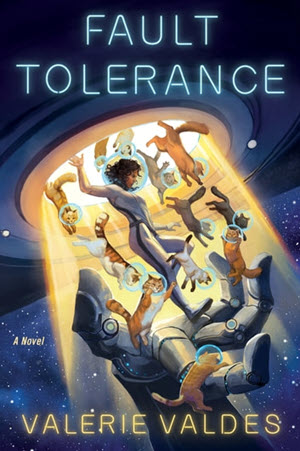 This book is the last in Valerie Valdes’ trilogy of stories about Captain Eva Innocente and her rag-tag crew of misfit found family. It is, as usual, a lot of fun. Valdes has made a point of filling the books with nerdy references, and the main characters are largely lovable despite their manifest faults. However, the books are space opera, and that brings with it expectations.

The thing about space opera is that everything must be done on a grand scale, and the treat has to keep ramping up. So in Chilling Effect we get to know our lovable bunch of semi-reluctant space pirates. In Prime Deceptions things get a bit more serious, and the crew gets involved in some galactic politics. For the finale, we can expect nothing less than the fate of the entire universe being at stake.

One of the features of the setting that Valdes has constructed is a collection of hyperspace gates that allow travel around the galaxy. No one knows how they work. They were apparently constructed by a mysterious race of aliens called the Proarkhe who disappeared millions of years ago. Can you say, “Chekov’s aliens”?

So in Fault Tolerance we learn that the reason the Proarkhe disappeared is that they were fighting a vicious civil war amongst themselves. One of the causes over which they fought was whether they should allow other forms of live to co-exist with them, or whether all inferior beings should be eliminated. The faction called the Artificers, who favour the elimination of all other forms of life, have gained the upper hand, and have decided to get on with the job.

The other faction is keen to mount some opposition, but they have little military power left. They need to activate some legendary super-weapons, and they need help to do it. Fortunately they have been monitoring the activities of other life forms, and they are convinced that the best allies they can get are the crew of La Sirena Negra. Hello Eva, want to help save the universe?

Of course this would not be an Eva Innocente book without some nerdy references. It turns out that the Proarkhe are Transformers. That is, they are giant, inorganic lifeforms that are able to modify their body shape at will. The super-weapons that Eva is sent to collect are more like the jaeger from Pacific Rim – they are giant, humanoid robots that need a pilot. But they too can transform, and do other things. Someone who knows their anime better than me would be able to explain the references.

Oh, and one other thing. The Proarkhe are pathologically afraid of cats, and Eva has a ship full of them.

Of course Eva’s family manage to get mixed up in things too, and make themselves difficult in their own particular ways. The Artificers, knowing they have to defeat Eva, hire her former boss, Tito Santiago, who really is a ruthless, bloodthirsty space pirate. And inevitably Miles Fucking Erck manages to insert himself into the action and explain how, as an Alpha Male, he should be the star of the story. “Well, actually…”

There is a lot of comedy in the book, but it has a serious side too. Eva already feels massively guilty about the dangers she has put her crew though. Now she is being asked to save the universe, and bring them along for the ride. Worse, her alien boyfriend, Vakar, has been called away by his superiors in the secret service unit that he works for. Eva should have her ship’s doctor, Pink, for a shoulder to cry on, but Pink has her own problems with the sudden re-appearance of an old flame who may, or may not, be secretly working for Tito.

One of the things I love about Valdes’ work is her ability to turn the plot on a sixpence. You’ll be happy going along with Eva as she sorts out her current problem, it is all going well, and then in the last paragraph or two of the chapter something wild happens and we are all deep in the mierda again. It is impressive to watch.

Mostly, however, I love the humour and the references. I mean, how can I not love a book in which the universe is saved by a [redacted]?