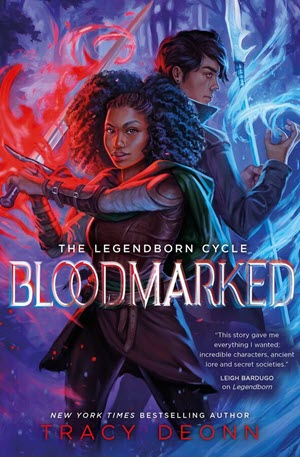 Volume 2 of one of my favorite modern Arthuriana series has dropped, and naturally I pounced upon it. Bloodmarked is a sequel to Legendborn, by Tracy Deonn. I really can’t talk about this book without referencing the events of the first book. If you haven’t read that book and don’t want to be spoiled, look away now.

So, at the end of Legendborn, our heroine, Bree Matthews, has been revealed as a true descendent of King Arthur. That’s because the secret cult that has been keeping Arthur’s legacy alive, known as the Legendborn Order, got involved in the colonization of America, and one of them couldn’t resist raping a slave woman.

Naturally most of the order is unhappy to discover that the current incarnation of Arthur is a black teenage girl. The majority of them are deep into white supremacy. They all thought that Arthur would be Nick Davis, who is the current male heir of the right family. But, thanks to complicated ancestry stuff, Nick is actually Lancelot, and therefore Bree’s boyfriend.

Except that Nick has been kidnapped by his father, who is determined to see his family’s grasp on power maintained. Bree is pretty much on her own against an entire secret cult of elderly white racists. Her only support comes from Selwyn (Merlin), whose behavior is distinctly odd and who once tried to kill Bree in Legendborn, and from William (Gawain), who turns out to be the most lovely lad whom I am sure I would have fallen for if I was 16.

With all of this going on in book 1, Deonn has work to do in order to make Bloodmarked more than just a follow-on with no mystery to it. She avoids that trap by bringing in other parts of the world. After all, if there is a secret magical society preserving the legacy of King Arthur, then surely other groups of people will have their own magical secrets. The Welsh can’t be the only people in the world who can do magic, can they?

Of course not. The African-American community has its own influences, and its modern incarnations of ancient powers. Deonn brings much of that into Bloodmarked. Being tolerably well-read in such things, I do know who it is that one is likely to meet at a place called the Crossroads Lounge. And I love that Deonn has chosen to portray him as a sort of teenage Loki.

Much happens, and there is a great deal of teenage angst, as there must be in such a book. There is also a great deal of hope, as most of the young people in the book are horrified by the racism and sexism espoused by their elders. But we all know where power rests, and teenage rebellion can only take you so far. Plus there are the dead to worry about. Because if their spirits have been hanging around for a couple of millennia then they are most definitely not really dead. Arthur’s legacy has been kept alive for a reason. The Order is quite happy to throw their guardianship away to preserve white supremacy, but the enemy sees that as a weakness to be exploited. Arthur isn’t too happy about it either.

And there we must leave them. There will doubtless be a climactic finale around this time next year. I’m very much looking forward to it, because Deonn is doing a marvelous job of combining a traditional YA storyline with Arthuriana and some heartfelt observations on racial politics.