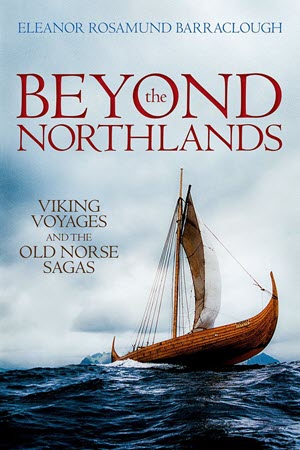 I did promise you that I would be reviewing history books here. I need to get them read, and that means I might as well review them. This one is likely to appeal to a lot of you.

Most people who have got involved in fantasy, and especially those who have done role-playing, will have a passing familiarity with the Norse sagas. Failing all else, you will probably have followed the adventures of Ragnar Lodbrok on Netflix. But there is much more to the sagas than simple bloodfeuds and massacring English clergy.

In Beyond the Northlands, Eleanor Rosamund Barraclough seeks to tell the history of the Norse through the lens of the sagas. The end result is one part history, one part fantasy fiction, and one part soap opera. Well maybe two parts soap opera, because that’s what the sagas are closest to in literary form. There might be a part of geography in there too, because Barraclough has made a point of visiting many of the places that the sagas talk about.

Thematically the book in divided into four parts. Each one follows the adventures of the Norse as they travel away from their homeland in the four directions of the compass. There they will seek out new lands and new civilisations, and massacre anyone who gets in their way.

The North section takes us to Finnmark, along the northern coast of Norway. The people that the Norse call “Finnar” are not what we know as Finns, but rather the Sámi. They are, of course, all malevolent sorcerers, especially their women, who are also preternaturally beautiful. What is a poor Norse adventurer to do? Thankfully the Sámi are willing to trade. Being a nomadic people, they miss out on a lot of the benefits of animal husbandry, and are absolute suckers for butter and bacon.

The West takes us to Iceland, Greenland, and Vinland. It tells of how the terrible rogue, Erik the Red, became the original dishonest property developer. “Greenland, yes, lovely place. I’ve been there myself. Glorious weather.” It also tells of how some of his family travelled yet further west and found a land brimming with all of the benefits that nature could provide. Unfortunately that land was home to vicious warriors whom the Norse called Skraelings, who turned out to be too much to handle, even for Vikings.

The East means Russia, and the story of how a bunch of enterprising Swedes ended up becoming a people known as the Rus. It turns out that the name has nothing to do with red hair, and is actually derived from an old Swedish word meaning “a bunch of lads rowing a boat”. Here we learn of the adventurers of Harald Hardrada, who in his youth befriended the King of the Rus, became a captain in the Varangian Guard, and attracted the attention of the amorous Empress Zoë of Byzantium. We also learn how, after a few hundred years, the descendants of Harold Godwinson finally made their way back onto the English throne. Along the way, though Barraclough doesn’t make much of it, we can also see the seeds of the enmity between Russian and Ukraine.

Finally there is South, which means pilgrimage to Rome and the Holy Land. Our Norse heroes have become Christians. There is, perhaps, a certain amount of political expediency in that, because it turns out that if you go on a Crusade you can massacre the locals to your heart’s content and claim that you are doing God’s work.

Of course the sagas were not written down until around the 13th Century, long after even the latest events that they recount took place. Nevertheless, it does seem that they are based solidly on oral tradition, and if the occasional dragon, troll, uniped or dog-headed man makes an appearance, well, that just adds to the fun. You can still get a lot of history from them.

I loved this book. Barraclough has a very easy style, and very much leans into the black humour that pervades much of the sagas. If you are thinking that the book has some overlap with Cat Jarman’s excellent River Kings, you would be dead right. What’s more you can hear Jarman interview Barraclough about the book on her podcast here. Enjoy!