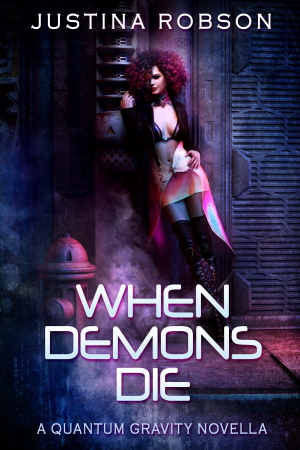 Justina Robson’s Quantum Gravity books are beginning to fade into the past. Obviously I remember the iconic images of Lila Black from the Gollancz covers. Zal and Teazle are starting to become a bit hazy. But one character remains vivid in my mind: Sorcha, Teazle’s pop diva sister. She’s like Beyoncé was an actual succubus, and being a demon she caused all sorts of mischief just for fun. Sadly she died in book two. Or did she?

When Demons Die is a new novella from Robson which recaps some of the events of Sorcha’s apparent death, and tells us what really happened to her. Spoiler: it isn’t glorious, and Sorcha is very much Not Happy about it. But you can’t keep a good diva down for long.

The book is, I think, partly a recap of events from Selling Out. My copy is in a box somewhere waiting for a bunch of removals guys to transport it to Wales. The rest of the book tells us what actually happened, and how Sorcha tries to get her life back on track.

It will come as no surprise to Robson fans that there is a fair amount of feminist ranting in the book. Shots are also fired at the rock business, the art business, and wealthy people in general.

Perhaps the most interesting part of the book, however, is Sorcha’s character. She is a demon. Demons do not think like humans. They despise weakness and boredom. They plot ceaselessly against each other. They are long-lived, but not immortal, and they would much rather die young, and gloriously, than fade into senescence and irrelevance. Robson has to make Sorcha believable, not just as wild and dangerous, but also as deeply concerned about her status in demon society. It is an interesting challenge, and one I think she rises to.

Also, of course, I’m very pleased to have more of Sorcha causing chaos for people who very much deserve a little chaos in their lives. I wonder if she’d be up for playing a concert in Westminster?