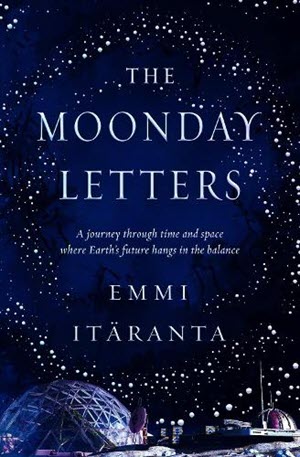 It is hard not to be impressed by Emmi Itäranta. Few people are competent enough to write good novels. Far fewer can do that in two different languages. Itäranta writes initially in Finnish, then does her own translations into English. She’s also at home writing both science fiction and fantasy, or a mixture of the two. Her debut novel, The Memory of Water, which was a finalist for the Arthur C Clarke and Philip K Dick awards, has been made into a film. This novel won the Tähtivaeltaja Award from the Helsinki Science Fiction Society – an accolade that had previously eluded her. I could go on.

The downside of Itäranta’s production process is it takes time to write a book twice. The Moonday Letters was published in Finland by Teos last year. The English edition appeared from Titan in July. Of course if you happen to be thinking of Hugo eligibility then the book is newly eligible because the original was in Finnish. And awards that cater solely to books in English should also be OK.

But what about the book. Ah, well… As the title suggests, The Moonday Letters is an epistolary novel. The central character, Lumi, is hoping to catch up with her partner, Sol, but she’s been out on Europa and, by the time she gets back to Mars, Sol has been called way for work. She follows them, only to find that they appear to have been kidnapped by environmental terrorists. Lumi knows Sol well, and can spot clues that they have left for her as to their whereabouts. Clues that the police totally miss. And so she follows, writing letters at each stage of the journey so that Sol can read her adventures when the two of them are finally re-united.

Wait. Back up. Europa? Mars? The Earth, sadly, is a mess. Much of it is underwater. The surviving population struggles to feed itself. The poor dream of one day getting a visa to Mars and a life of opportunity, but few ever make it. Yes, there is an allegory for the American Green Card Lottery. Lumi is one of the lucky few. The circumstances of her escape from Earth are somewhat spoilery, but I can note that she proved to have a talent for healing. It is a spiritual calling as much as anything else, and one rooted in ancient traditions.

You may have spotted that Sol is non-binary. This does not phase Lumi. Indeed, she links it to her healing traditions.

Presenting gender outside the binary was sometimes seen as a sign of power and hidden abilities. Healers combined androgynous elements in their costumes, like a beard with a dress. They were believed to have greater insight into the world because they were not bound by one gender.

Clearly Itäranta has been reading the same sorts of anthropology textbooks as me. Sol, however, is not a healer. They are an ethnobotanist, which is a real job. Wikipedia describes their occupation as on who, “strives to document the local customs involving the practical uses of local flora for many aspects of life, such as plants as medicines, foods, intoxicants and clothing.” Making homes for humans in the disparate parts of the solar system has made Sol’s work much more valuable. But it also puts them at the cutting edge of political debate. Should humans live on space stations? Should they be allowed to modify planetary ecosystems in any way? There are debates to be had.

For too long humans have thought about themselves as separate from nature, above it. Exploitation of natural resources is seen as a right that doesn’t entail responsibilities. That’s why Earth is the way it is today. Only a complete reversal of thinking can bring a change.

I really don’t want to say anything more about the plot. Just read it, it is a great book.