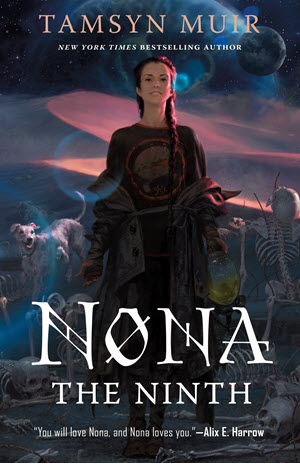 Well that was different, but then what did we expect? If anything characterizes Tamsyn Muir’s fiction to date, it is an absolute delight in pulling the rug out from under the reader.

Let’s recap. Gideon the Ninth was a locked room murder mystery featuring a group of punk teenagers mostly desperate to ascend to lyctorhood in what most people assumed was a fantasy universe but, if you looked carefully enough, was space opera set in our solar system. At its heart was the disaster lesbians relationship between Gideon and Harrowhark.

Book two, Harrow the Ninth, sees Harrow finally ascended (and therefore Gideon dead), and we get to meet the adults in the story. John Gaius, Emperor of the Solar System, Necrolord Prime, King of the Nine Renewals, Giver of Resurrection, His Celestial Kindness, King Undying and sometime reluctant political revolutionary, is losing control of his hand-picked team of immortal aides-de-camp. Harrow is not entirely sane. And Ianthe is being a bitch, as usual. We learn some of the terrible things that happened when John took over the world, and how angry ghosts can cause problems even for the most powerful necromancers. Gideon is not dead, then dead again, which I guess is what happens if you hang about with bone-fiddlers.

At the end of Harrow the Ninth the scene suddenly shifts. We are on another planet, and there is a teenage girl called Nona who has no memories. It is Nona who will become the central character of book three.

Wherever we are is also home to Blood of Eden, a revolutionary group opposed to the rule of John Gaius and his necromancers. Also on the planet we find Phyrra Dve, Camilla Hect, Judith Deuteros and Coronabeth Tridentarius. Each of them has a complex relationship with Blood of Eden (well, except Judith, who is busy failing to die). Each of them has a theory as to who Nona is, or may become. Nona is at school with a bunch of almost-ordinary kids, and a teacher who has a six-legged dog.

However, the planet is under attack from one of the Resurrection Beasts, Varun the Eater, who appears to be the dead ghost of the planet Uranus. Mysteriously, Nona seems to know Varun well, and be able to communicate with him, though she doesn’t tell anyone else about this and doesn’t seem to find it in any way unusual.

Then Ianthe turns up and is a bitch, as usual.

Meanwhile our narrative in interspersed with some backstory about how John and his friends fought a losing battle against the greed of world governments bent on lining their own pockets at the expense of the long-term future of planet Earth. By accident they discover necromancy, and everything goes downhill from there. That includes exploding an atom bomb in Melbourne. Tamsyn, we are going to have words about this.

All of this is to help us better understand the world in which the story is set, and to get all the necessary pieces into the right place to open the Locked Tomb and unleash, well, that would be a spoiler.

Two things occurred me to while reading this book. The first is that I need to re-read the series from the start, back-to-back, with a lexicon for the series to hand, so that I can pick up on all the little clues that Muir litters throughout the narrative. The other is that I know of only one other work of science fiction to which that necessity applies: Gene Wolfe’s Book of the New Sun.

There are similarities. Both Wolfe and Muir flit seamlessly between science fiction and fantasy. Both series are set in the ruins of the solar system. And in both series it is devilishly hard to know who is who because people have a habit of inhabiting other bodies and the author gives only the slightest clues that this is happening.

In particular, in Nona the Ninth, Phyrra is inhabiting the body of her dead cavalier, while Camilla is carrying the soul of Palmedes Sextus, who is nominally dead and obviously not a Lyctor because the inhabitation should take place the other way around. Goodness only knows who Nona might be.