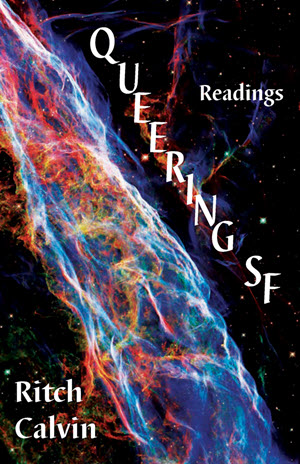 This is a new publication from Aqueduct Press. The author, Ritch Calvin, is a lecturer in Women’s, Gender, and Sexuality Studies at Stony Brook University in New York. The book is a collection of short essays on various works of queer SF. There are 36 essays in all, covering a range of works from the 1930s to fairly recent material such as Dirty Computer and FINNA. They may be lecture notes, though 36 is a lot of lectures to have in one course.

The good thing about Queering SF is that it provides a great overview of several decades of queer SF. It makes it clear that the likes of Samuel Delany, Joanna Russ, Tanith Lee and Raphael Carter were producing interesting works in times when, if Twitter is to be believed, no queer SF was allowed to be published.

The downside of any such project is that it is impossible to treat any of the works covered in any depth. The paperback is 218 pages, so by the time we have allowed space for an introduction, contents, bibliography and so on we have little more than 5 pages per essay. Given the level of nuance necessary in much queer SF, that’s a problem.

When I get a book like this, the first thing that I do is zero in on the sections about works I am familiar with. If they are good, I know I can have confidence in the rest of the content. First up was the section on The Female Man, where Calvin seems unaware of the burgeoning new movement of anti-trans feminism that was growing when the book came out, and which uses some of the same themes as the book. Calvin also cites me, but doesn’t seem to understand the points I was making.

The section on Sense8, which Calvin seems to have strongly disliked, is unaware of the metaphor about trans heathcare that is built into the plot. The section on Dirty Computer is unaware of Janelle Monáe’s use of imagery from Monica Sjöö’s art in the video for “Pynk”. On the other hand, the section on FINNA taught me a bit about how the Swedish language was used in the book.

I wondered initially whether Calvin simply didn’t know much about trans issues, but his treatment of FINNA is fine and his essay on Isabel Fall’s “Helicopter Story” is caring and insightful. Calvin notes at the end, “[Trans people] do not have the luxury to write whatever they like without its reflecting upon the entire community.” This is very true.

So I think the verdict on Queering SF is that a project like this takes an enormous amount of effort to do as well as I would like, and that level of effort is probably more than any sane working academic is likely to put in. As an introduction to the field, however, it is excellent. There are lots of essays about books that I did not know about. As for its use in lectures, there is a lot for students to think about, and if you were to use these essays as a starting point there would be a lot for them to follow up on.