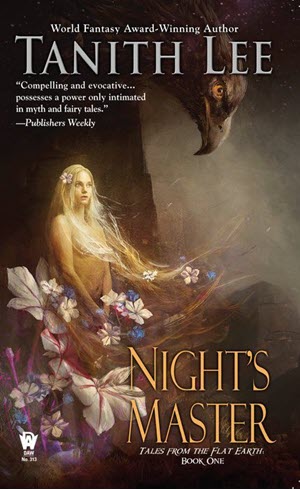 This is a very old book. It was first published in 1978. Tanith Lee is someone whom lots of people have told me I should read (most insistently, Liz Williams), but you know the saying: so many books, so little time.

However, I am currently writing an essay about queer gods in fantasy for the next Academia Lunare book. I put out a request to the hive mind on Twitter for recommendations. There was enthusiastic backing for Night’s Master by Tanith Lee, so I bought a copy.

I have known for some time that, if you ask the Internet for recommendations for good trans representation in books, you will get a whole bunch of cis people recommending books that are dubious at best, and often examples of really bad trans rep. Apparently the same applies to requests for good queer representation. Because straight people often think that being queer is bad, they will recommend books in which the only queer characters are terrible people.

That isn’t entirely fair to Night’s Master, because like most things it is complicated. The book, which was a finalist for the World Fantasy Award, is a linked collection of tales about a character called Azhrarn who is Prince of Demons, Lord of Darkness, and all round chief of the forces of evil. Being a demon, he is bisexual. He is not entirely a bad person. Sometimes he is the bringer of justice to some really awful people. But sometimes he capriciously kills off someone whose only crime was foolishly asking him for a small boon when he’s in a bad mood. He does enjoy causing suffering, and he is especially cruel to anyone he thinks has slighted him.

It is also worth noting that there are no gods in the world of the book. There is no Good to balance the Evil of the demons, who are simply part of the natural world. Demons are as demons do, and it is by no means clear that Lee intended us to see Azhrarn as a villain. However, as queer rep goes, we can, and should, do better.

Mention of the world of the book brings me to something else notable about Night’s Master. It is book one in a series called Tales from the Flat Earth. Long before the world was a disc carried on the back of four elephants and a giant turtle, there was Tanith Lee’s Flat Earth. Above the plane lives mankind, and below it live the various species of demons. I have no idea where Terry Pratchett got the idea from, but I suspect that he was aware of Tanith Lee’s work.

The most important thing about Night’s Master, however, is that the prose is glorious. Lee has got the style of traditional fantasy down pat. The way the stories are structured and told, they could almost be part of the Arabian Nights. Each new story follows on in some way from the previous one, and inevitably the final story wraps back to the start. I was impressed. I should have been reading Tanith Lee, and so should you.