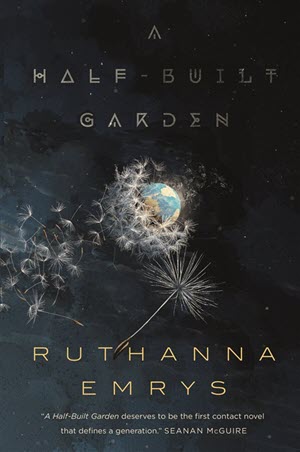 I bought this book because of an enthusiastic recommendation from Cory Doctorow on Twitter. I’ve been meaning to read Ruthanna Emrys’ Innsmouth Legacy series for some time because the books sound really interesting, but you know what my To Read pile is like. Then here was Cory and it is only one book. I had no idea…

The thing that Cory was interested in was the political set-up in the book. A Half-Built Garden is a near-future science fiction novel set in a world in which environmental campaigners have fought back against multi-national corporations and won. The corporates have retreated to a bunch of artificial islands where they continue to develop products they hope they can sell to the rest of the world. Nation states still exist, but they seem to have stepped back from the process of government. The task of healing the planet has been inherited by quasi-political organisations called Watersheds. There is one for each of the world’s major river basins.

Exactly how this works is not clear, but Judy Wallach-Stevens works as an environmental chemist monitoring water quality in the Chesapeake watershed in Virginia. One night she gets an emergency notification of some strange substances being released into the water. She and her wife, Carol, head out to investigate. There being no babysitting options available, they take baby Dori with them. That turns out to have been a momentous choice. When they reach the site of the contamination they discover that the cause is an alien spacecraft.

So yes, this is a First Contact novel. It is also an environmental SF novel because the aliens have come to rescue mankind from Earth. Their view is that planets are too small and too difficult to manage. Proper, civilized intelligent species spread out into the cosmos and live on habitats they have built by taking apart unwanted planets. Judy and Carol, on the other hand, love planetary habitats and want a chance to rebuild theirs. The resent the idea that they should be “rescued” for their own good.

So yes, this is a novel about Colonialism. The aliens view the people of Earth as, at best, part civilized, and likely to destroy themselves at any moment. This isn’t an idle view. Earth is the first planet with intelligent life that they have managed to find and get to before disaster overtakes it and the inhabitants are wiped out. Humanity, inevitably, is deeply divided about what to do. The Corporates are keen to get out there and exploit galactic markets. NASA cannot wait to get hold of the aliens’ space flight technology. And the Watersheds want a chance to prove that planets are worth saving.

Back now to politics. We know how nation states and corporations work. The Watersheds have a novel means of governance. They have created their own internet, free of government and corporate control. On it they conduct political discussion by way of what are essentially bulletin boards with sophisticated algorithms that help communities reach consensus decisions about important issues such as what to do about the aliens.

This, I suspect, is what Cory was excited about. I note also that Malka Older gets a big shout out in the acknowledgements. The intention is clearly to offer up a serious political proposition. As always with these things, I am deeply suspicious. Consensus politics sounds great in theory, but in practice provided a convenient exploit for far-left groups to take over organisations. Also any system that relies solely on mass voting on issues runs the risk of succumbing to the Tyranny of the Majority. Far right politicians in the UK are already saying that LGBT+ people should not be allowed to have civil rights if the majority of the population don’t want them to. There isn’t room in the novel for Emrys to explore these questions, but she does highlight the risk of algorithms being hacked.

This being a novel, she’s talking actual software, but we all know that the algorithms that social media companies use to police anti-social behaviour are riddled with simple exploits that far-right groups use to get their opponents banned. As I originally wrote this, Harry Turtledove had been banned from Twitter for the crime of saying “fuck off” to a troll who accused him of being anti-Semitic (Turtledove is Jewish). Harry is back now, but the incompetence of the Twitter algorithms is plain to see. There’s also the whole thing about Russian troll farms poisoning discourse on social media to destabilize Western governments.

So yes, this is a novel about modern political problems.

Oh yes, First Contact, aliens. It turns out that they are indeed alien. There are two separate species. Those called “plains-folk” are a sort of pangolin-centipede hybrid. In contrast the “tree-folk” are like large, ten-legged spiders. Both species think that humans have a suspicious lack of legs. The two species do have different attitudes, and that will become key later in the novel. The aliens too have internal politics to deal with.

Remember that I mentioned baby Dori back at the beginning? Well it turns out that the aliens see brining your children to a political negotiation as a sure sign of civilization and decency. After all, if you are prepared to put your kids at risk, you can hardly be planning a bloody double-cross (George Martin novels notwithstanding).

But, and it is a big but, the plains folks, one of whom commands the alien ship, are really quite obsessed with children, to the point of being rather biological-essentialist about life. This is a major problem for our heroes. Judy and Carol are part of a queer, polygamous household. Carol, the more feminine of the two, whom the alien captain assumes is Dori’s biological mother, is a trans woman.

So yes, this is a novel about gender, and not only in the way that you might think. The Watershed folks are very much a 21st Century queer community. For them, gender is all about how you feel inside. Your presentation, the role you play in society and so on are all open. Pronoun badges are a thing. So far so usual.

You might expect the Corporates to be very gender binary, but they are the absolute opposite. For them, gender is all about performance. No one except partners need ever know what your true gender is; indeed it is rude to ask. Gender changes depending on social circumstances, and on political games that you are playing within the corporation. Pronouns change with it. Everyone is expected to be able to tell what pronouns you are currently using from your presentation.

Given that the corporates are the closest that the book has to bad guys, I expect that some non-binary people will be very angry about this and will claim that the book is transphobic. I don’t see it that way. Everyone in the book has flaws, and I don’t think that Emrys is trying to make out that the way the Watersheds do gender is the only right way to do it.

As you can see, there is an awful lot in this book. It is about politics, the environment, gender, First Contact and families. I haven’t even mentioned how Judy & Carol’s religious faith becomes key to the unfolding of the plot. A Half-Built Garden is a book that is packed with ideas. It doesn’t really have space to explore them all in detail, but it will certainly leave you thinking. This is what science fiction is supposed to do.