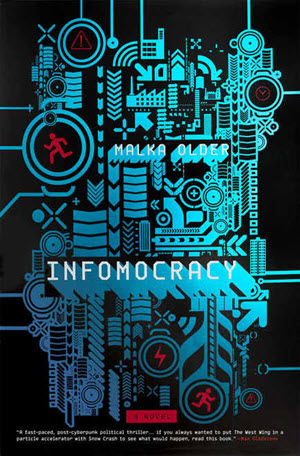 Every so often you read a book that has been out for ages and you think to yourself, “why haven’t I been a fan of this writer for ages?” Of course the Centenal Cycle was up for the Best Series Hugo in 2019, but that just highlights the major flaw with the category – hardly anyone has the time to read that many novels.

However, Malka Older was the international Guest of Honour for Finncon 2022, so I made time to read Infomocracy. Hoo boy! That was so up my street.

A little introduction is in order. Older’s PhD (from the Institut d’Études Politques de Paris) is about “multi-level governance and disaster response”. She now works at the School for the Future of Innovation in Society at Arizona State University. She also has more than a decade of experience in running humanitarian aid programs. This is someone with serious experience of working with and for government bodies. She also writes very well. Her keynote speech was about the use of predictive fiction in a political context. See what I mean?

The Centenal Cycle of which Infomocracy is the first volume, is set in a near-future world where most of the planet is ruled by a world democracy where constituencies are based on local groups of 100,000 people each. This is microdemocracy in action. The party that controls a centenal is allowed to set local laws. Those of you who remember Ken MacLeod’s The Star Fraction will remember Norlonto, which does a similar thing, on a much smaller scale.

Interestingly there is freedom of movement, much like the EU. People are able to move to a centenal that usually returns the sort of government they like. I’d like to see more exploration of this. I’m disappointed that there was no mention of explicitly queer-friendly centenals, for example.

In addition, a party that has a supermajority of centenals is allowed to form a global government. It isn’t clear what percentage of centenals is required for a supermajority, nor what voting system is used, but there is a plethora of political parties. Some, like 1China, are ethnically based. SavePlanet is an environmentalist party. The current governing party, Heritage, appears to be a sort of “safe hands conservatives” group. Another major party, Liberty, are more of a far-right group majoring on individual liberty above all else.

One of the main characters, Mishima, works for Information. This is a UN-type organization whose responsibility is running elections, and for promoting transparency and correct information. A well-informed electorate is a good electorate, right? Ha! We know better now, but even when Older was writing this book she would have seen George W Bush pilot the idea of “truthiness”, whereby politicians could tell blatant lies and still claim that they were in some sense “true” because they were what people wanted to believe. Older is well aware of this:

That creep at the Liberty meeting was right about one thing: despite all the Information available, people tend to look at what they want to see.

She also fairly accurately predicts the current state of politics in the USA and UK:

…democracy is of limited usefulness when there are no good choices, or when the good choices become bad as soon as you’ve chosen them, or when all the Information access in the world can’t make people use it.

Nevertheless, the major parties take elections very seriously. The other major candidate is Ken, a campaign worker for Policy1st, a technocrat party that claims to eschew personalities in favour of policies. Ken spends election season going round the world gauging the political temperature of key centenals, and spying on the messages that rival parties are pushing.

Of course not everyone in the world likes having a world government. A few parts of the world, including Saudi Arabia, refuse to take part and continue to rule themselves. There are also people who want to tear the whole system down. A minor character, Domaine, works for an anti-election group and spends election season trying to discredit the whole process.

Because this is a novel, not real life, there is something of a love triangle between Mishima, Ken and Domaine.

Naturally the plot revolves around skullduggery during an election. This gives Mishima an opportunity to demonstrate her Trinity-like skills in addition to her spreadsheet-wrangling ability.

As this is a three-volume series I’m not going to comment much more sat this stage, except to say that I will be reading the other two books because I am very interested in the arguments that Older is going to make.