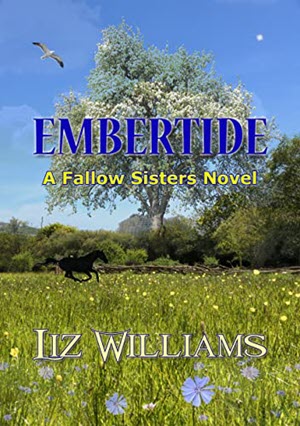 A new Fallow Sisters novel from Liz Williams is pretty much guaranteed to have me drop everything and read it. I’m heavily invested in the series and I want to know how things will end up. Having said that, Embertide does have the feel of something that is moving the story along rather than being a thing of its own right. It is a sort of “middle book of a trilogy” thing.

The book, then, develops the stories of the sisters that haven’t had much of a starring role before. Whereas Blackthorn Winter was primarily about Serena and her fashion business, Embertide is primarily about Stella, the DJ. The next book, I suspect, will be more about Luna, the youngest, as her pregnancy is now well advanced. Williams has been talking online about there being a fifth book, and my guess is that it will finally resolve the issue of the sisters’ mother, Alys, and her on-off presence in their lives.

All of the books are heavily rooted in British folklore and occultism. I was interested to see that this one made use of a couple of folk songs. The first is the Scottish nonsense song, “Aiken Drum”. The official history is that the song is Jacobite in origin, but I’ve long been of the view that there might be more to it than that. I figure that Julian May must have had a reason for making Drum one of the main characters in the Saga of the Exiles. Having Williams make him a powerful faerie being with a connection to the Wild Hunt has merely deepened that suspicion.

The other featured tune is “Green Grow the Rushes, Oh!”, which is a call and response song that may in part be used to teach counting. The traditional interpretation suggests that the various lines are all Christian in origin, and a few of them quite clearly are. On the other hand, the seven stars are obviously the Pleiades, and some of the others are not at all obvious. Williams makes use of line two, the ‘lily white boys all dressed up in green, oh’. For her they are also somewhat malevolent hunting spirits.

All this talk of the hunt raises the question of who is being hunted. The sisters are all shape-shifters so any of them are possible, but inevitably the main target is a white hind. Stella spends most of her time in London and Williams has her meet Diana the Huntress at Saint Paul’s (a church which, legend has it, was built on the site of Londinium’s Temple of Diana).

The Romans, however, don’t get to own this story. Williams connects Diana to a more ancient Celtic goddess called Noualen or Nehalennia. She gives her name to the town of Newlyn in Cornwall, but is also closely associated with London. Chasing her down lead me to a book called The Secret Lore of London (which I promptly bought as it is cheap on Kindle). In that book Harold Bayley suggests that the name Lon-dun (Lon’s hill fort) might originally have been Noualen’s Dun.

Of course Bayley also says that Noualen’s animal is the greyhound, but Embertide is fiction and Williams is under no obligation to stick to anyone’s theory.

Along the way, Embertide also brings in odd goings on at a posh birthday party in Windsor Great Park, and similarly strange stuff at Cheltenham races. We also get to meet a fabulous rat-person whose family are guardians of London. The villainous Miranda Dean makes a return appearance. If you enjoyed the previous two books, you will love Embertide too. But I strongly suggest that you start with Comet Weather as there is a distinct story arc and you’ll want to get to know the characters.