A Prayer for the Crown-Shy 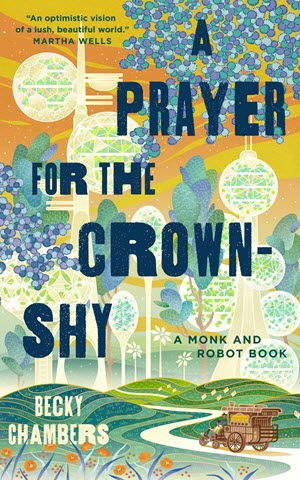 As with Embertide, A Prayer for the Crown-Shy feels very much like a middle book. Indeed, it may well be the middle book of a trilogy. There’s not a lot of left to learn about the world of the Monk and Robot books, and we know at some point Dex has to take Mosscap to the City to meet Important People. But for now Becky Chambers is content to develop the relationship between her two main characters.

In A Psalm for the Wild-Built it was Sibling Dex who had a lot to learn. He’d never seen an actual robot before, and knew nothing of the wild lands where he encountered Mosscap. In this book, Mosscap has to do the learning. He’s never encountered humans in large numbers before, and knows nothing about human society. It is, understandably, an overwhelming experience.

The one piece of worldbuilding that Chambers does here is teaching Mosscap about the human economic system. It is essentially money, though it is not called that, and it doesn’t need banks and interest rates. I was a little suspicious at first, until I was reminded that the human world has a sophisticated internet system that can keep track of translations and lead to easy price discovery.

Mosscap also gets to meet Sibling Dex’s family, which is a whole other new experience. That includes discovering that humans can be quite dishonest with other humans that they claim to care deeply about.

Mostly, however, the book is about Dex and Mosscap procrastinating about doing something they know they need to do. They may feel that they have different reasons for doing so, but the real reason is that they have come to value each other’s company. Once they get to the City, their journey is over, and they may have to part. We won’t find out until the next book. Which Chambers is procrastinating about writing. I rather hope that the two of them just head off into the wilds together and live happily.