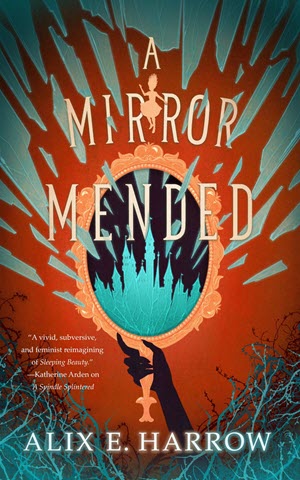 Alix Harrow’s A Spindle Splintered was one of the stand-out novellas of last year. The new book follows the same lead character, Zinna Gray, and tries to wring something else out of the idea. There are, after all, issues to be addressed. Key amongst them is the problem of “happy ever after”. As Zinnia herself points out at the start of the book, this is actually a contraction. The original traditional ending of fairy stories was that everyone was “happy in the ever after”, i.e. in Heaven. Real happy ever after doesn’t happen in the mortal world, because life happens.

The other major issue concerns fairy tale villains. In a fairy tale you can’t have a damsel in distress without a wicked witch or stepmother (probably both in the same person) causing that distress. Why is it that young, pretty girls are the heroines, and older women are the villains? Why is it so rare for the wicked older woman to even have a name, let alone a backstory explaining why she is the way she is?

These, then, are the questions that Harrow addresses in A Mirror Mended. For the most part I thing she succeeds, but it also feels a bit like an academic exercise.

This can sometimes be a problem with speculative fiction. A great idea can carry a book. But once you have worked through the idea, trying to set more stories in the same world can be hard. A wise writer aiming at writing a series will not reveal everything in the first book. You keep some mysteries back for the later volumes. I don’t know whether Harrow planned to write this book, but get the sense that it is more of an afterthought.

This doesn’t make A Mirror Mended a bad book. I very much enjoyed reading it. But it doesn’t have the wow factor of A Spindle Splintered. I’m finding myself struggling to find anything to say about it. That, of course, is the difference between adventure stories and real life.

Towards the end, Zinnia has this thought:

Maybe because it never occurred me to that it could be enough to just live, as happily as you can, for as long as you have.

Which, from the perspective of my sixty-plus years on this planet, I can see is very wise advice. But it isn’t the way younger people tend to think. When we are young we want to be the heroes of our own stories. In practice, few of us ever get to be heroes. Those that do often find that celebrity turns to dust in their mouths.

So yeah, maybe us older women are the villains in adventure stories because we know that few people ever get to change the world, but also that living happily does not depend on getting the perfect life that you dream about. If that makes me a wicked witch, well, so be it. Harrow, I think, would agree.