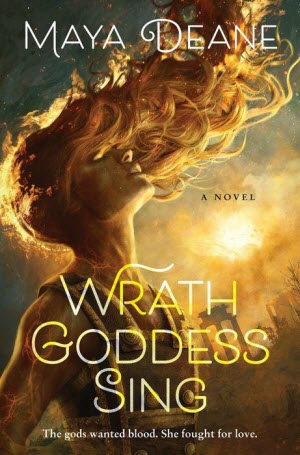 There are some writers who are so good at what they do that I would give an awful lot to be able to write like them. (Guy Kay is one of them. Cat Valente, obviously, is another.) But I wouldn’t necessarily write the sort of books that they write. Wrath Goddess Sing by Maya Deane is the sort of book that I wish I could have written, and would have written if I had been good enough and brave enough.

Fairly obviously, if you are familiar with my fiction, it is a mythology re-telling. Specifically it is Homeric fanfic. You will see a lot of upset people around the Internet complaining that Deane has “got it wrong”. Reader, she has not. The trouble is that Homeric fanfic is not a new thing. Euripides wrote a lot of Homeric fanfic. So did Vergil. As far as the ancients were concerned, the tale of the Trojan War and its aftermath were ripe for reinterpretation, and the whole thing was out of copyright.

In the 19th and 20th centuries, Western European writers tried to make sense of the resulting mess. They wanted to define a canon. Reader, the Iliad contradicts itself in places. It has less in the way of stable canon than Doctor Who. In particular, there is no mention of the wooden horse in the Iliad. There is brief mention of it in the Odyssey, but the version we know comes mainly from the Aeneid. Also Agamemnon’s sacrifice of Iphigenia is not in the Iliad. Neither is Iphigenia. There is a girl called Iphianassa who might be the same person, but she’s alive through the whole thing.

So when you see people complaining that Deane has her Iliad wrong, you have my permission to laugh.

Of course she does change things deliberately, but that’s largely for the better. To start with she makes a determined effort to situate the entire story in the Bronze Age. That means that Troy must be a Hittite city, or at least would have been part of the Hittite Empire. The city at Hissarlik, which Heinrich Schliemann identified as Troy, was once allied to the great Hittite King, Suppiluliuma I, who was a contemporary of Akhenaten. It was known as Wilusa (Ilusa, Ilium), and at one point it had a famous king called Alaksandu. In the Iliad, Paris is sometimes named Alexandros.

Oh, and the Achaean warriors wear proper, Bronze Age armour, including boar tusk helmets. They do not wear the sort of hoplite armour that you see in pictures of Classical era Greeks. There is also discussion of the relative merits of the 3-man Hittite heavy chariot as opposed to the lighter and more maneuverable 2-man, Egyptian style chariots favoured by the Achaeans.

The Bronze Age was a period of substantial international trade. Egypt, obviously, was key to that. The main political rivalry was between the Hittites and the Egyptians. This came to a head at the battle of Kadesh between an Egyptian army under Ramses II, and a Hittite army under Muwatalli II. We have a copy of a treaty between Muwatalli and Alaksandu of Wilusa. It seems likely that Wilusan soldiers formed part of the Hittite army at Kadesh. Deane has Myrmidon mercenaries under Patroclus fight for the Egyptians, and uses this as an excuse to give Patroclus an Egyptian wife.

Why was Patroclus leading the Myrmidons? Because of something else that is not in the Iliad, but which Deane chooses to use. The story is that Achilles’ mother, Thetis, knowing that her boy is fated to die young, raises him as a girl and sends her to live on the island of Skyros. There she is known as Pyrrha, the red-haired girl. The usual story is that Achilles has a strong male gender identity, and is keen to run off to war as soon as Agamemnon and Odysseus offer the possibility. Many years ago I wrote some fanfic about this incident.

Deane chooses to reimagine Achilles as a trans girl who has run away to Skyros where she can live in a community of people similar to the galli of ancient Rome. We know that such people existed in Classical Greece, and there is good reason to believe that such traditions stretched all the way back to Sumer. This Achilles is not keen on going to war, but Athena offers her an irresistible choice: fight for me, and I will make you a cisgender woman.

Naturally, this changes everything. In particular Deanne re-writes the whole Agamemnon and Briseis story and makes it make much more sense.

I should mention the gods as well. Back in the 19th and early 20th centuries there was a habit amongst Classicists to propose an evolution of middle-eastern religion down the centuries, ending with the perfection of the Graeco-Roman world. This narrative has long since been abandoned, and in reaction to it academics have tended to decry any parallels drawn between the gods of different cultures in the ancient world. That’s something of an over-reaction.

Clearly ancient cultures did influence each other. They also grew and changed during their periods of dominance. The religion of the Bronze Age Greeks was probably significantly different from that of the Greek people when the works attributed to Homer were written. That again was different from the religion of Classical Greeks. The Romans collected gods from all over their Empire and worshipped the lot of them, muddling them together with gay abandon.

In Wrath Goddess Sing the gods are predators, and mortals are their prey. Demigods such as Achilles can easily fall into the same sort of behaviour. Guess who else is a demigod? Helen. (She was born from an egg after Zeus had sex with Leda while in the form of a swan.)

“Me,” Helen whispered. “Everyone wants me. So let the strongest have me. The world will be my dowry.”

Those of you who have read Roz Kaveney’s Rhapsody of Blood series may see some parallels in the way in which Deane constructs wars between gods, but it is absolutely not the same thing. Deane does many of her own things, some of which are absolutely outrageous. I am now very much looking forward to the next book, which I understand will be set in Ahkenaten’s Egypt.

I should note that Achilles is not a nice person. How can she be? She is a warrior demigod destined to slaughter most of the Trojan’s best fighters. Another reason that you may dislike the book is that it is dripping in scholarship, from linguistics to mythology to history. I’m probably way too close to the erudition on display here to know whether this is a bad thing for others, but I love it.

Balanced again this is my favourite character from the book, Meryapi. She’s the Egyptian princess that Patroclus has married, and she is absolutely delightful. She’s a linguistics nerd and a wannabe sorceress. She also represents ordinary womanhood, in contrast to the demigod archetypes of Achilles and Helen.

My other favourite character is Odysseus, obviously. Deane somehow made me fall in love with the old rogue all over again, even though I know what a terrible person he is.

“Next time,” Odysseus said mildly, “remember me. I’m good at idiotic plans; you’re good at killing things. Together we could work much mischief.”

Of course one of the joys of fanfic is that you get to read new stories about beloved characters all over again.

Oh, and remember, nothing good ever came of learning the language of dolphins. They are terrible, terrible people.