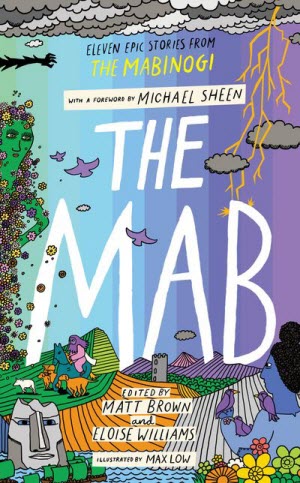 Most of you will probably have heard of The Mabinogion. For those who haven’t, it is a compilation of mythological tales written in Middle Welsh. Some of the stories feature King Arthur. Lloyd Alexander’s The Chronicles of Prydain series is loosely based on some of the tales in The Mabinogion.

So what is The Mab? To start with, it is a version of The Mabinogion for children. There’s no age recommendation on the book, but I’m guessing Middle Grade or younger. This means that the stories featured have been shortened, have had certain things omitted, and have had jokes added.

For example, the book opens with a re-telling of the First Branch, the tale of Pwyll, Prince of Dyfed. While it does tell the story of how Pwyll meets Rhiannon and they get married, it does not mention that she is fleeing an arranged marriage. It also has an ongoing joke about trousers which is not in the original.

For a kids’ book, this is all good stuff. The editors, Matt Brown and Eloise Williams, know what they are doing with children’s literature. Indeed, Williams was the first ever Welsh Children’s Laureate. I’m assuming that the other writers have good track records too. And the book contains some beautiful illustrations from Max Low.

So if you have kids and would like an introduction to Welsh mythology for them, The Mab is a good start. But it is more than that, because all of the stories are presented in two versions: one in English, and one translated into Welsh by Bethan Gwanas. Modern Welsh, not Middle Welsh, which is considerably less understandable. This makes the book perfect for schools in Wales, but also for anyone learning Welsh. Because the stories are short and use simple language, they are relatively easy reading for learners.

The book was crowdfunded on Unbound, and you will find my name in the Supporters list at the back.

Oh, and there is an introduction by Michael Sheen, which you are allowed to imagine being read to you by Aziraphale, because why wouldn’t you?