Of Charms, Ghosts and Grievances 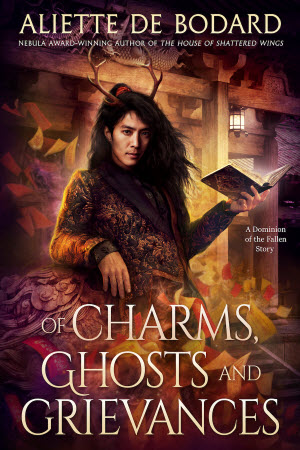 I was talking elsewhere about authors whose books I buy and read as soon as they came out. Aliette de Bodard has made her way into those ranks. With a full time job, and raising two kids on her own, she’s mostly producing short fiction these days, but it is glorious stuff.

Of Charms, Ghosts and Grievances is one of her follow-up stories set in the world of the Dominion of the Fallen series. It is a companion to Of Dragons, Feasts and Murders in that is features literatures most unlikely gay couple: Asmodeus and Thuan. He is a powerful fallen angel who never met anything he didn’t want to stab, if only briefly. And he is a dragon prince from a community of shape-shifters who live under the Seine and who is never happier then when he has a book in his hand.

As with the previous book, this is a murder mystery. Thuan is asked to babysit some children from his dragon family, and needs to find something for them to do before Asmodeus teaches them to hide knives in their clothing and stab people by surprise. They head out into the kelp forest, and find an ancient shrine. There they find a ghost of a child, and the recently dead body of an imperial bureaucrat. It seems like the ghost may know something about the murder. But it is clear that the murderer does not want to be found out, even if that means killing Prince Thuan and his dangerous foreign husband, not to mention two small children. The process of finding out who the murderer is involves seeking help from one of Thaun’s ex-girlfriends, which is rather awkward for him.

The thing I love about these books is that both Asmodeus and Thuan are such intense, vibrant characters. Here is a typical Asmodeus moment.

Asmodeus hated poison. He thought it was too unpredictable, cowardly, and pointless – what was the point of not seeing one’s enemies get stabbed? But that also meant that he’d extensively studied how not to get poisoned.

And here is Thuan.

Thuan tried not to worry. Unfortunately, ‘worry’ was his default state of being.

Everyone else is aware of this, especially Thuan’s family.

“You know we’d never harm children. Or allow them to be harmed.”

“I do,” Hong Chi said. “I’m worried about what you’ll do to people who try to harm them.”

That was… not inaccurate. Asmodeus had very strong ideas about protecting the people in his charge, and he applied these double or triple to children. Thuan was less stab-happy, but no way was he going to let someone hurt children on his watch. “We didn’t kill anyone.”

He could see the “yet” forming on Hong Chi’s lips.

So yes, this is a charming story, and of course also infused with East Asian mythologies. Great entertainment.