All the Seas of the World 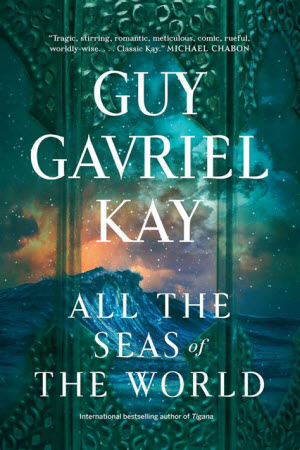 There are not many authors for whom I can say, “anything they write I will buy and read immediately.” Some authors that I am a huge fan of don’t always produce the sort of books I want to read. That’s because they have a fairly wide range of authorly interests. Other authors are much more predictable. That’s definitely the case with Guy Gavriel Kay. I know what sort of book I will get from him, and I know I will love it.

If you are a Kay fan, you too will know what to expect. If you are new to his writing, then you should probably start with Children of Earth and Sky as this book is the third in a loose series, or perhaps even with one of Kay’s earlier books such as Tigana. I’ll spend the rest of this review talking about plot rather than style. For simplicity I will mostly stick with Kay-world names for things and people rather than try to explain how they map onto our world.

Interestingly, Kay has chosen to set this book after A Brightness Long Ago, but mostly before the events of Children of Earth and Sky. There is a fair amount of overlap of cast between the books, though as far as main characters go it is only the inimitable Folco Cino d’Acorsi who is key to both books. That is, of course, exactly how things should be. The one-eyed condottiero was a star of the previous book and I’m delighted to have him back.

The book also includes a supporting role for Guidanio Cerra, the narrator of A Brightness Long Ago. While most of the new book is written in the third person, Kay allows Danio to narrate some of this book too. We also get to meet Lenia Serrana, the sister of Carlo Serrana, the champion jockey from the legendary horse race at Bischio which is so pivotal to the previous book.

Lenia is one of the two lead characters of the book. The other is Rafel Ben Natan, a Kindath merchant. Between them, Rafel and Lenia own the Silver Wake, a ship which mostly carries trade goods but, because this is the Mediterranean in Renaissance times, is occasionally hired for more clandestine purposes.

Thus the opening of the book, in which Rafel and Lenia are hired to smuggle an assassin into the city of Abaneven. That city is on the south coast of the sea, and therefore under Asharite control. The target of the assassin is the Khalif of the city, but he has been hired, not by the Jaddites, but by rival Asharite warlords. Specifically, the ibn Tiphon brothers who are lords of the city of Tarouz, and also notorious corsairs.

A quick break into our world here. This is a book about the Barbary Corsairs. The ibn Tiphon brothers are based on the Reis brothers, the most famous of whom, Oruç, was nicknamed Baba Oruç (Father Oruç), which Europeans mutated into Barbarossa. Ben Natan is loosely based on Samuel Pallache, a Jewish merchant and sometime pirate.

In typical Kay fashion, the assassination is only the first domino in a trail of events that will topple as history unfolds. Rafel and Lenia will be deeply involved, as will Folco. The importance of the events are magnified by the fact that Gurçu the Destroyer has conquered the great Jaddite city of Sarantium and brought it into the Asharite world. The current High Patriarch, Scarsone Sardi, knows that he doesn’t have much chance of organizing a Crusade as happened in days of old, but he is none the less desperate for some sort of impressive public victory over the Asharites.

In great affairs of state such as this, people like Rafel and Lenia are of little import. He is Kindath, she is a woman, but they have a friend and protector in Folco. They are also rather good at what they do.

Fans of traditional fantasy narratives will doubtless be frustrated by the fact that the lead characters have relatively little agency and don’t really drive the plot, except at pivotal moments. They will probably wonder why the book isn’t about Folco. But this is what Kay does. His central characters are ordinary people mixed up in world-shattering affairs, not fantasy heroes. I continue to be impressed at Kay’s ability to plot his novels so that his characters are in just the right place to quietly tip the scales of history.

I should note that the book contains a number of same-sex relationships. The characters involved on the male side don’t come out of thigs very well. The female side of things is rather happier. Kay is not producing a queer-centered novel here, he is noting that queer relationships were common in the past, but that the lives queer people lived were often difficult and dangerous. One of the most obviously heterosexual characters doesn’t come out of things well either.

If you love Kay’s writing, which I do, then you will love this book. If you are new to Kay then this probably isn’t the best place to start. But I do hope that more people will start reading him, because he is so good at what he does.