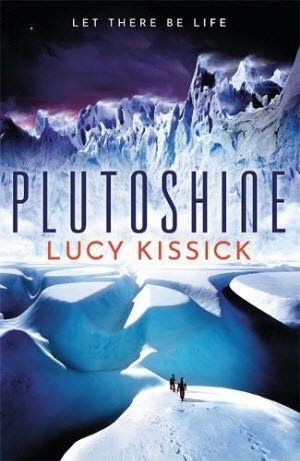 Last month I featured a review of a debut novel from a woman writer fresh out of university that I found very impressive. Now I have another one, equally impressive, but very different.

Julie Crisp sent me this book, because she knows I like to promote up-and-coming women writers. That’s a good agent at work. She was smart to take on Lucy Kissick too. A science fiction writer with a PhD from Oxford on the lakes of Mars. Yes, seriously, an actual areologist.

The book, however, is not about Mars. That much is obvious from the title. Plutoshine is, as it says on the tin, about terraforming Pluto. Our hero, Lucian, is part of a team sent to make that remote and forbidding world a little more pleasant for humans to live on. Specifically his job is to built the giant mirror that will catch and focus what little sunlight reaches that far-flung corner of the solar system.

By the way, there’s a certain amount of hat-tip naming in the book. The head of the terraforming mission is called Professor Halley. Lucian’s assistant is called Stan (short for Stanisław, not Stanley). I’m therefore going to assume that Lucian is named after Lucian of Samosata, the first writer to imagine a trip to the moon.

Meanwhile, back with the plot. The terraforming project is being carried out at the behest of one Clavius Harbour, a billionaire industrialist who founded the Pluto colony. However, when the team arrives, they find things have changed during their transit. Harbour is in a coma, and the colony is now being run by his son, Edmund. There was some sort of accident. Edmund is very tight-lipped about the whole thing, and his little sister, Nou, hasn’t spoken a word since it happened.

Also, terraforming is controversial. It hasn’t always gone well. Lucian’s home colony on Mercury suffered one of the disasters, which claimed the life of his father. Some people, like Lucian, vow to get it right in future. Others want it stopped. Often those people are xenobiologists, because primitive forms of life have been found elsewhere in the solar system. If life is found on Pluto, the whole project could be put on indefinite hold.

That gives us our plot. Firstly we have the mystery of what happened to Clavius Harbour. And secondly someone is trying to sabotage the terraforming project. Central to all this is little Nou. Lucian, soft-hearted to a fault, decides to take her under his wing and try teaching her sign language, wherein lies a whole heap of trouble.

It should go without saying that Kissick knows her stuff. However, for those of you who have insufficient faith, I note that the book has rave blurbs from Stephen Baxter, Al Reynolds and Paul McAuley, all of whom have solid reputations for hard SF. It also has one from Paul Cornell who knows a bit about big questions and small children.

One final recommendation from me. Many near-future SF stories have characters who are fond of 20th (or now early 21st) Century culture. I’m assuming this allows the authors to enthuse a bit about their favourite bands and the like. Kissick is having none of this. She has invented a favourite rock band for Lucian, and also a favourite series of children’s fantasy books for him to give to Nou to read (by an author who hasn’t turned out to have deeply questionable politics). Good for her.

If you happen to be involved with a US-based publisher and are looking for a hot new hard SF writer to publish, do get in touch with Julie, because Lucy Kissick is just what you are looking for.