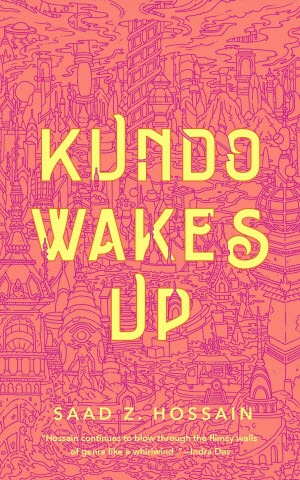 Kundo Wakes Up is the latest in a series of books, mostly novellas, by Saad Z Hossain, who is fast becoming one of my favourite writers. They are essentially cyberpunk, but set in a near future South Asia which manages to be a much better setting for such tales than Seattle. They also have djinn. Everything is better with djinn, it seems.

The book begins with Kundo waking up, but the title has a double meaning because our hero has been in a profound depression for some time, and he’s just about to become active again. He’s also going to become much more aware of the way his world works, so perhaps it is a triple meaning.

Kundo used to be a famous artist. That was before the world started to fall apart. He lives in Chittagong on the Bay of Bengal. The ocean is gradually encroaching on the city, and the local version of Karma, the AI that controls the city, has more or less given up on humans. They still have utility. As we learned earlier in the series, humans are super factories for making nanotech. This is a far more sensible use for them than “batteries” or whatever nonsense there was in The Matrix. But, as Karma has discovered, humans can still do the job if they are being kept alive in old people’s homes. They don’t need to be up and about and causing trouble.

Kundo has enough Karma Points to live in luxury for the rest of his active life (and will doubtless be useful to Karma long after he has ceased to be active). But what is the point? There is no one to buy his art any more. No one cares. Even his wife has left him. One year and 237 days ago to be precise. At first Kundo tried to find her, or at least find out why she left, but every clue led to a dead end, and he sunk into depression. Quite why he has suddenly woken up is unclear, but for now he is back on the job.

Those of you who are familiar with Hossain’s work will expect that the plot will somehow involve video games, and you will be right. You will also expect that djinn will be involved, and you will be right again. But mostly it is an examination of the lives of two old men: the formerly famous artist, and Hafez the Tiger, once the most feared gangster in all Chittagong, and now barely able to walk unaided.

Along the way, Hossain asks what it means to get to live forever in paradise, and whether that is a goal worth chasing.

I don’t want to say much more, because this is only a novella, but it is a fun read and has serious points to make.