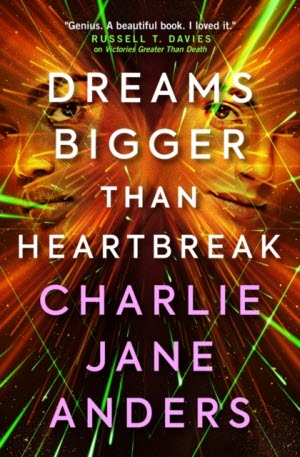 I don’t read a lot of YA, but I’d be happy to bet that Charlie Jane Anders’ Unstoppable series is not typical. It is not just about teenagers. It is about mostly queer teenagers.

In the first book, Victories Greater than Death, we discovered that Earth girl, Tina Mains, is actually a clone of the famous starship captain, Thaoh Argentian. Aided by a bunch of misfit teenagers from Earth, they vanquish the bad guys and save the galaxy. Or at least they save the Queen and her Royal Fleet.

Well, you see, Marrant, the leader of the evil rebels, who call themselves The Compassion, is well known in Galactic Society. He’s a respectable chap with a silver tongue, not a bunch of rag tag kids from a no-name planet in the back of beyond. Also Marrant has an easy sell on certain planets. Multi-speciesism is not universally popular. Especially when some of those species don’t even have radial symmetry, but do have tentacles.

Meanwhile our heroes have problems of their own. Rachel lost her ability to make art during her battle with the bad guys at the end of the previous book. Tina is discovering that being Captain Argentian’s clone brings with it expectations, and those don’t include being a pacifist. Elza is discovering that enlisting in the Princess Corps is not simply done on merit, you have to a privileged snob from an important planet too. And so on.

It is not long, therefore, before our heroes are pitted against Marrant and his horde of speciesist followers. However, despite being a bunch of annoying, thuggish bigots, they are not the real enemy. They are simply taking advantage of a genuine existential crisis to make a bid for power. The real bad guys are a Vayt, a gloomy species that has no concept of art. They have unleashed a weapon so terrible that the galaxy has about a year to live.

Yes, this is a series about climate change, how did you guess?

But back to the book. In fine space opera tradition it has some silly names. I’m not a big fan of the names of the aliens, but The Compassion is spot on. Their flagship is called Unity at All Costs, and their soldiers are known as Mercy Killers. Elza ends up working with someone called Princess Constellation, whose gnomic utterances make Zen koans seem a model of clarity. And Rachel finds herself about a spaceship crewed by an anarchist art collective. The ship is called Training Bra Disaster.

So yes, Dreams Bigger than Heartbreak is all very silly and charming, but it also makes some very important points along the way.