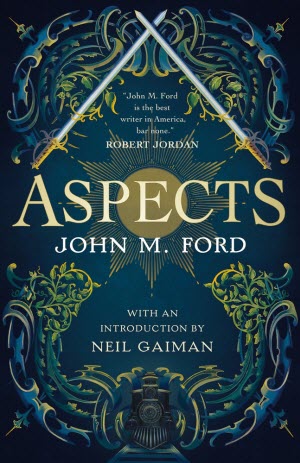 Most of you will, I suspect, know that this book is unfinished. What I hadn’t quite twigged before starting it, is that it is not just an unfinished novel, it is an unfinished fantasy series. No one knows how many books John M Ford had planned before his untimely death in 2006, but it was clearly more than one.

So why should you read it? Well to start with the prose is glorious. Nothing much happens in the first few chapters. A duel is fought, and the victor turns out to be one of the major characters. There is some debate in Parliament. Our hero’s best friend (who turns out to be gay) tries to fix him up with a girlfriend, which is a complicated thing for middle-aged members of the nobility. And yet I was transfixed, because of the quality of the writing and worldbuilding.

Oh yes, this is a secondary world. It is kind of Victorian, in that there are steam trains and a telegraph system, and a world slowly moving out of feudalism into an industrial democracy. Our heroes are members of the House of Lords. There is a House of Commons where the nouveau riche sit, but is has little power yet. The King has abdicated.

There is also magic. The House of Lords has seats reserved for senior sorcerers, and a key law that is being debated concerns the legal liability that sorcerers have for acts of magic. There are clergymen in the Lords too; several of them as the local religion is somewhat polytheistic. There are four main goddesses. Each has a consort (not all of whom are male, it appears), and these days each is seen as an aspect of one great Goddess.

Which brings us to gender. There are women in Parliament. Inheritance amongst the nobility appears to be entirely gender-neutral. Some of the most powerful sorcerers are women. Another major female character in the book is the Inspector of Ironways, and therefore one of the most important people involved in the railway industry. Ford hasn’t created a world entirely free of patriarchy, but he has created one that is far more free of it than our own is, even now.

What his world is not free of is autocracy. Most of the major characters are members of the nobility in some way. Our hero, Varic, and his good friend Brook, are trying to establish a new way of running a country where there is a Constitution, and Laws, and noblemen cannot act as petty kings within their own fiefdom.

This is one of the themes that Ford was starting to explore in the book. He was doing do through one of Varic and Brook’s main problems in Parliament: Cable, the Chief Justiciar. Cable is the sort of man who believes utterly in the sanctity of the Law, but has no understanding whatsoever of justice. A Lord (Coron is the title in the world of the book) is likely to know his or her people, and on investigating the circumstances of a crime can rule upon it in a way that is just. Cable would have every judge strictly bound by a rule book from which they must never deviate, no matter how wrong the verdict might be.

We see this also in the debate over legal control of sorcery. Magic is a wild and unpredictable thing. At one point Ford quotes an old proverb to the effect that if a master sorcerer has not accidentally killed three close friends then he’s not really trying. If a sorcerer is asked to bring an end to a drought, but the ensuing heavy rains wash away a bridge and a child is drowned, is the sorcerer liable for the damage, or guilty of murder?

There has to be action as well, though the plot doesn’t get going until halfway through Aspects. There isn’t really enough in what we have to see the expected shape of the plot, though it would appear to involve hostile action, if not outright war, involving the neighbouring state of Ferangard. Early in the book, Varic and Brook attend a party to welcome the new Ferangarder Ambassador. It features a display of a new weapon — a machine gun whose rapid loading of bullets is achieved by sorcery.

The book, however, was not planned to be that simple. Ferangard may see weakness in the social issues facing our heroes. Ford is certainly aware of them. As in a traditional Victorian novel, the characters have servants. They are mostly well treated, but they are servants none-the-less. Some social mobility is possible. We see this in the character of Winterhill. He’s a former orphan and petty thief who was lucky enough to be rescued by a philanthropist and well educated. He now puts his talents to use as a private eye for hire, and occasional assassin. He mixes with the upper classes, but he will never be one of them.

Much of the novel takes place in and around a large country house owned by a man called Strange. At major holidays, such as solstices and equinoxes, Strange entertains guests, members of the great and good whom he feels should know each other. Varic is a regular guest. Brook is not, because he once brought a toy boy who disgraced himself. The aforementioned Inspector of Ironways, Edaire. is a guest, as is the newly-elected what passes for Archbishop. Strange wants good people running the country, and does his best to put them together. (The contrast with the group of thieves currently running the UK is stark.)

Anyway, Strange has a head coachman. She and her wife have a young son who dreams of working on the Ironways. Naturally he plies Edaire with questions. What training does one go through before one can drive a train? How much longer before one can drive an elite express? Then young Hazel asks a key question: at what point in his career as an ironwayman would he be eligible to be a Guest at Strange’s house. Ah, well…

One more thing before I stop. Many fantasy novels contain poetry. Much of it is dreadful. I even skip the poetry in Tolkien. Ford has poetry in Aspects. I read every single piece with admiration.

So yeah, Ford, Mike to his friends, was taken from us much too young. I met him on occasions, but never got to know him. That is a major regret in my life.