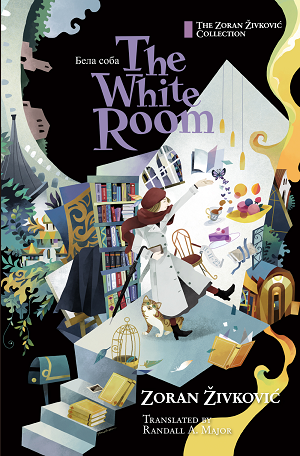 If you want to know the things we see
Then step inside our skins
– “The White Room”, The KLF

Back in Emerald City days, when I was starting to get interested in SF&F in translation, I was contacted by a Serbian writer called Zoran Živković. It was probably Jeff VanderMeer’s fault. Lots of things were. Živković was already hugely respected in his native land, and on the European literary scene, but he wanted his work to come to the attention of the English-speaking SF&F market. He might have been accepted as a literary writer, and have a post teaching creative writing at the University of Belgrade, but he had done his PhD on Arthur C Clarke so there was an itch left unscratched.

In those days, breaking into the English-speaking market was very hard, even more so than it is today. Živković used to do his own translations of his work and have small print runs done that he could send out to drum up interest. For published versions, Tamar Yellin or Alice Copple-Tošić would add a little polish to the prose.

As time went by, and with support from a whole bunch of great people, Živković established a reputation. His work wasn’t going to appeal to the general SF&F audience, but it fitted in well with the New Weird thing that was going on at the time. When my colleagues at SFSFC and I were running World Fantasy in 2009, and got ordered by the World Fantasy to bring in another guest (apparently we had too many members), we went for Živković rather than another anglophone horror writer. I hope that Steve Jones was suitably annoyed.

In 2017 Živković was recognised as a European Grand Master by ESFS at the Eurocon in Dortmund. His bio now lists this as his crowning achievement. Since then, and after 22 novels, he announced his retirement. That’s fair enough. He’s in his 70s these days and retired from work. His entire catalogue is available in beautiful new editions from Cadmus Press, with stunning covers by Youchan Ito. He has other things to do with his life. Which is why I was surprised to get email from him asking if I would like a copy of his new novel. Naturally I jumped at the chance.

The White Room will doubtless be seen as somewhat self-indulgent by some readers. It is, after all, a book in which the main writer is an elderly professor of creative writing from Belgrade, a man by the name of Zoran Živković. It is also a book that is very much the sort of thing that Živković fans have come to know and love. And, as we shall see, in part concerned with very modern issues.

The plot of the book can be summed up in the first line: “Ivana had gone missing.” The Professor Živković of the book is twice-divorced and now lives with a somewhat younger, though very much middle-aged, woman who had been a student in his writing classes. Ivana and the Professor have that “fond of each other but each have our own lives and histories” relationship that people who meet well into their lives tend to do. Živković thinks nothing of it when Ivana goes out one day without telling him where she is going. It isn’t until the evening, when she doesn’t come back to dinner, that he realises something is wrong.

Naturally the Professor phones the police, and then has the embarrassing experience of explaining that he doesn’t know where his girlfriend went, and can’t even remember what she was wearing when she left. The lady police inspector that he talks to is unimpressed. Fortunately the Belgrade police have an excellent CCTV system with coverage of most of the city, and they are soon on the track of the missing Ivana.

Why, then, has Ivana gone missing? Has she been kidnapped? Have she and the professor had a fight that he isn’t telling us about because he in an unreliable narrator of his own life? Has he just not noticed a cooling in her affections?

Then the emails start arriving. Each one contains a clickable link that is less a URL and more the activation code for some sophisticated malware that brings up short video showing Ivana doing various things that Živković knows she would not, or even cannot, do. Eventually it becomes obvious that these videos are sophisticated deep fakes, and the Serbian government’s cyber war team takes an interest. What began as a case of a missing girlfriend soon ramps up into a situation that could lead to Professor Živković being disappeared by his government’s counter-espionage operatives.

That’s enough from me. You’ll need to read the book to find out where this goes. It is only a couple of hundred pages, so you’ll get through it quickly. Enjoy.