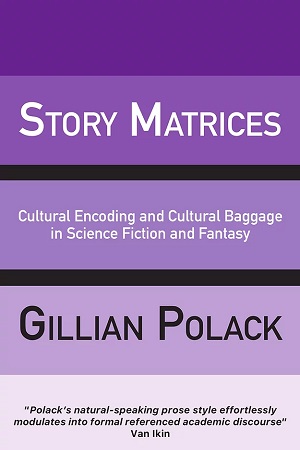 The full title of this book is Story Matrices: Cultural Encoding and Cultural Baggage in Science Fiction and Fantasy, because it is an academic work and therefore must have a colon somewhere. However, don’t let that put you off, because Gillian Polack tries hard to make her work accessible, and the book is published by Luna Press so it does not cost three years’ wages to buy.

The basic concept of the book is an extended metaphor about building novels with cultural bricks. That should be fairly obvious. With any story world that you build, you have a choice of cultural elements that you can include, or not. If that were all that the book was, it would be fairly trivial. But it isn’t.

Polack adds to her analytical tools by borrowing three terms from linguistics (idiolect, dialect and language). These she re-casts into idioculture, diaculture and culture. Broadly speaking these mean the writers own views, the writer’s relationships with others, and the writer’s broader relationship with their native culture. This is quite familiar to me because I use similar techniques to explain how people relate to gender.

All of this is useful from the points of view of both analysing and constructing a novel, and Polack’s book will therefore be of interest to both critics and writers. In particular it should help navigate contentious issues such as cultural appropriation. It may also help authors identify blind spots in their work. For example, I was disappointed, though not entirely surprised, to discover that most “mediaeval” fantasy does not contain any Jewish characters, or Jewish-analogue characters, even when the setting is clearly based on an historical milieu in which Jews played a significant role in society.

As for historical fiction, let’s just not mention Ivanhoe, please. That could go on for a long time.

While I found the book very interesting, I do have a few reservations. The first is mildly bizarre, in that Marion Zimmer Bradley’s name is mis-spelled in about half of the occasions it appears, including one instance where it is correct once and incorrect once in the same paragraph.

More seriously, some of Polack’s examples could have benefitted from more research. Her explanation of the issues that the LGBT+ community has with JK Rowling is a little muddled. She describes Karen Lord as a more literary writer than Nalo Hopkinson on the basis of The Best of All Possible Worlds being published by Penguin Random House. But Hopkinson comes from a literary family, is a teacher of creative writing, and had her first novel published by Warner Aspect, whereas Lord’s academic background is in science and sociology, and her first novel, Redemption in Indigo, was published by Small Beer Press. The distinction seems somewhat odd to me (and I adore both writers). Her analysis of Irish writers and their relation to Irish history does not include Ian McDonald whose novels Hearts, Hands and Voices, and Sacrifice of Fools, are both intimately connected to recent Northern Irish history.

Finally, while Polack’s style is succinct and conversational, there are times when it seemed to me that she expected us to know what she was writing about. Consequently, I would have liked a little more detailed explanation of her points, even if that made the book more academic in style.

Overall, however, this is definitely a book I valued reading, and whose insights I hope to use in my own work. I’m also very well disposed to any mediaeval historian who backs up my opinion that the world of Westeros is economically and politically unworkable. Sorry George.