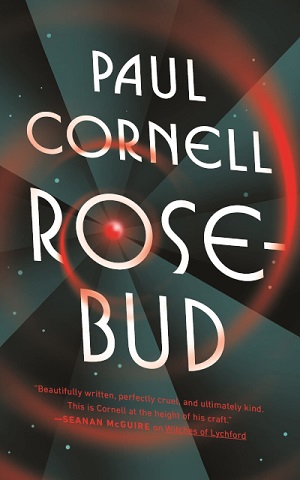 This is another book that I can’t give a proper review of, because I did a brief bit of consultancy work on it. My name is right there in the acknowledgements. But I did love the book when I first read it, and consequently want to tell you about it.

The Rosebud is a prospecting vessel mining the rings of Saturn for minerals. She belongs to the Company, as indeed does pretty much everything else. The crew of five are in indentured servitude and have had a degree of loyalty programmed into them, though not so much as it would interfere with their functioning as sentient minds.

I say minds because the crew of the Rosebud is entirely digital. The ship is, after all, only about 1 mm across. It is, nevertheless, packed with technology, and five minds. Some of them may once have been human, but they now all exist in software only. They are as follows.

Haunt is the gothiest goth that ever gothed, and is currently manifesting as something like Ghost Rider but with a very big black horse instead of a motorbike. Huge if True is a friendly spherical fellow covered in masses of small hands. Bob is an arsehole, both personally and professionally, but he manifests as a red balloon. Diana is a scientist of sorts and appears as an elegant human woman. And Quin, their captain, is a swarm of insects.

All of them could, no doubt, appear in other forms, but these bodies are ones that they have picked for a reason, have gotten used to, and have honed over the past 300 years of service aboard the Rosebud. There’s not a lot else to do when you are not working, though of course that isn’t very often. Not a lot happens in the rings of Saturn. Until one day it does.

That something is a craft similar to their own. It is a little smaller, perfectly spherical, perfectly black, and suspiciously alien. This is the sort of encounter for which an independently intelligent crew exists. Decisions need to be made that are outside of the mission parameters. Correct decisions may result in plaudits from the Company. Incorrect decisions will certainly result in punishment. Not doing anything is also a decision.

On the cover Peter Watts describes Rosebud (the book, not the spaceship) as, “a scream disguised as a giggle.” He’s spot on. What Paul Cornell has done here is take all of his angst and frustration about the state of the world, fling it out into the solar system, and feed it back to us via a found family of ridiculous misfits with an impossible mission who need to succeed despite the trauma each has faced in their past life that has led them to their current state of employed imprisonment.

There’s a content warning at the start of the book, and I should note that it is not just trans people who have been appallingly treated in the world of the book. Nevertheless, this is a book with hope at the end of that dark tunnel of political despair, and I’m very pleased that Cornell has written it.