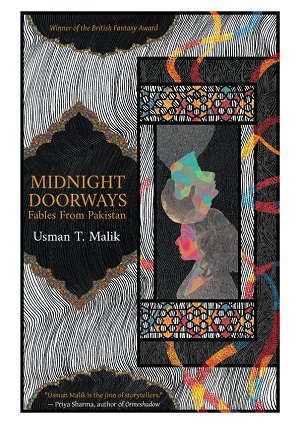 While the level of diversity in mainstream publishing has improved quite a bit of late, it is still hard for writers of colour who do not live in the Anglosphere to get their work considered. Often what they have to do is publish locally and hope that their book gets some attention, and is then picked up by a bigger publisher. Examples of this are Samit Basu’s Chosen Spirits, which will be re-published as The City Inside by Tot.com in June, and Lavanya Lakshminarayan’s Analog/Virtual, which will be republished as The Ten Percent Thief by Solaris next year. I am hoping that something similar will happen with Usman T Malik’s Midnight Doorways.

Malik is no stranger to the Anglosphere. Indeed, his fiction has already won both the Bram Stoker Award and the British Fantasy Award. He has twice been a finalist in the Nebulas, and once in the World Fantasy Awards. And yet his first collection was put out in 2021 by a small company called Kitab whom I think are based in Kathmandu, though the word means “book” so there could be many publishers of that name. Midnight Doorways has since been picked up by Hachette India (though with a terrible new cover) and there’s a kindle edition available from the Amazon India website. You can apparently get copies of the original edition via Malik’s website, though I guess they will go out of print soon.

Anyway, you should get a copy if you can.

My (electronic) copy came via the Crawford Award, as I’m one of the people whose opinions Gary Wolfe solicits when judging the award. The Crawford is for a first fantasy book, and is often won by collections. As you probably know, I’m not big on short fiction, and I’m not a great fan of horror, but other people involved with the Crawford were raving about this book so I asked for a copy. I immediately agreed that it should win. If a horror collection could win me over, it had to be really good.

I said that Midnight Doorways is horror, and Malik’s work is certainly marketed in that genre. However, this is not splatterpunk, or tentacled beings from beyond the stars, or even zombies. Malik’s stories are weird and creepy, and most definitely at least suggestive of the supernatural. In one story an ancient goddess eats rather a lot of people, but the story is being told to a police interrogator by an opium addict whose testimony may not be wholly reliable. A more common sort of horror is being a young girl in an orphanage coming to know that one day you will be too old and the staff will need to sell you to a husband in order to earn money to look after the next generation.

Malik makes no concessions to Anglo culture. His stories are set in Pakistan. The characters are mostly Muslim, with a scattering of Hindus and Christians. The issues that they face are very much the sort of issues that people living in places like Lahore face. And yet these people are entirely relatable. Malik is able to get us to understand them, to identify with them, and to feel for them. And some of them have very strange problems.

Despite the cover blurb, the book does not contain the British Fantasy Award winning novella, “The Pauper Prince and the Eucalyptus Jinn”. It does contain the Stoker-winning short story, “The Vaporization Enthalpy of a Peculiar Pakistani Family”, and the Stoker-finalist story, “Dead Lovers on Each Blade, Hung”. It is well worth a look if you can get hold of it. And if not, look out for Malik’s short fiction in magazines.