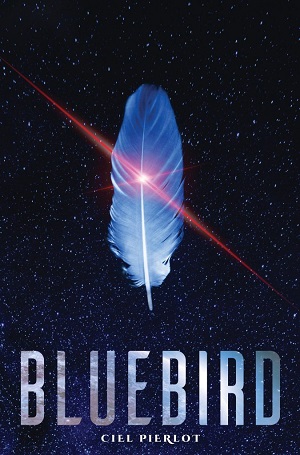 Did someone say, “lesbian space pirate”? I’m in.

Of course that’s not all that there is to Bluebird by Ciel Pierlot. There’s a lot of nifty worldbuilding for a start. Unlike rather too much space opera, Bluebird is not a tale of Evil Empire and Plucky Rebels. The politics are somewhat more subtle. The galaxy has three main factions. The folks from Pyrite are never happier than when they are in a lab up to their elbows in inventing something. The folks from Asectic dress in white and gold, thinking high minded thoughts while contemplating perfect works of art and drinking exquisite champagne. As for Ossuary, they tend to dress all in black and are probably never happier than when grimly contemplating a graveyard.

These, of course, are social ideals. Not everyone who lives under the control of a faction is stereotypical. Take Rig, for example. She was perfectly happy brilliantly inventing stuff until it occurred to her that there were moral issues involved in working for an arms manufacturer, and there are some weapons that should never find their way off the drawing board. Which is why she is now on the run working with a gang of smugglers who help people trying to escape from which ever faction they have got on the wrong side of.

Then there’s June, who is a head librarian on the Asectic homeworld. Her job is the preservation of all that is good and pure and vital to Asetic culture. That hasn’t stopped her from falling in love with a dashing, gun-slinging human disaster of a space pirate like Rig. Into every librarian’s life, a little chaos must fall.

The plot doesn’t really get going, however, until Rig’s life gets too chaotic, even for her. Firstly she meets Glinka, who is clearly also on the run, has combat skills that suggest she might secretly be Natasha Romanoff, and who is obviously very sick when she’s not doped up for action. Secondly, the Pyrite intelligence services, who very much want the weapon plans that Rig ran off with, have caught up with her. More specifically they have caught her sister, Daara, and are holding the poor girl to ransom.

If this reminds you of the plot of both Valerie Valdes novels, you would be dead right. The whole sibling in peril thing is getting a bit boring. However, I think Pierlot does it better. Which brings me to the cover blurb in which Tim Pratt describes Bluebird as, “stunningly assured.” He’s dead right. As far as I know, this is Pierlot’s first novel. Apparently she wrote it during lectures at university. If that’s what she can do now, I really want to see what she will come up with in five years’ time. I’ve seen better debuts, but they tend to be from people who have been working hard at their craft for years, if not decades, not people who are fresh out of college.

So there you have it. A fun, action-filled lesbian space romp. Did I need to write all of those words above? Probably not. That’s entirely sufficient recommendation.