A Psalm for the Wild-Built 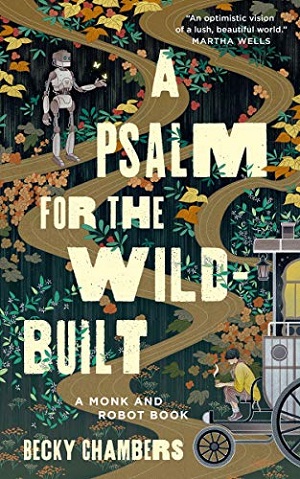 It is Hugo reading time, and that means catching up with Becky Chambers. It is easy to see why she is so popular. Her prose is effortlessly readable and deeply caring. But this can mask the amount of thought that she puts into her work.

A Psalm for the Wild-Built begins with mention of an entirely new religion. That’s an ambitious start for a novella. We don’t get detail about the six gods mentioned, but there’s enough to get a sense of what the people in the book will believe.

Our lead character, Sibling Dex, is a monk in the service of Allalae, the God of Small Comforts, represented by a bear. Immediately we have discovered that this is a society that recognises three genders, though how that works is not explored in this book. What we find instead is that Dex’s world is one in which the human (or human-analogue) inhabitants have stepped back from industrialisation and are trying to live in harmony with nature. So the book has an environmental message.

Dex is one of those people who are driven by a need to prove themselves. Although apparently good at what they do, Dex begins the book by resigning from their position in the city and taking up a new life as a travelling tea monk. This basically involves traveling from village to village in a self-propelled wagon acting as a combination tea shop and agony aunt. Skills in psychotherapy and tea-brewing are essential. It is an interesting vocation.

However, we don’t have much time to see Dex in action, because before long (in words rather than in time lived) they grow dissatisfied once more and head off into the wilderness to visit a long-abandoned monastery. Here we find the other important element of the book.

One of the reasons that Dex’s ancestors have abandoned industrialisation is that it abandoned them first. That is, the robots used in the society’s factories acquired sentience, went on strike, and decided to head off into the wilds and live apart from their former owners.

Here Chambers brings in all the standard science fictional tropes of robots being an analogue for slaves, and of what it means to be intelligent. She does this in a way that is all her own.

In the wilderness, Dex makes the acquaintance of Splendid Speckled Mosscap (Mosscap for short), a robot who has volunteered to be the first of their kind in generations to make contact with humans. Being a robot, Mosscap has no gender, but again that isn’t explored. What Chambers examines instead is Dex’s embarrassment at meeting a member of a formerly-enslaved population and inability to know how to behave in such a situation. This is exacerbated by the fact that Mosscap is entirely at home in the wilderness, whereas Dex is ignorant and helpless.

Give that the book is a novella, there isn’t a huge amount more than that to the plot, though Chambers packs a lot of interesting conversation into the rest of the story, and provides character growth for both Dex and Mosscap. I understand that there will be more books in the series, and I’m going to be pre-ordering them because I want to see how things develop. I’ll probably still put Cat Valente at the top of my ballot because I’m me, but the quality of the novella finalists this year is astonishing, and I have no idea who will win.