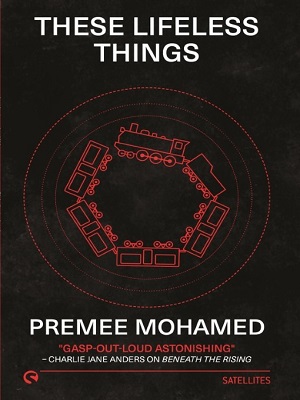 I owe this one to the good folks at the Hugo Book Club. They were recommending novellas that people might nominate. This one sounded interesting, and it was.

Premee Mohamed is best known for cosmic horror, which for most of us means Lovecraft. These Lifeless Things is in a similar vein, but it is not explicityly Mythos-related. It is a post-Apocalyptic story, and the apocalypse was caused by the arrival of Them. They may be aliens, but They did not arrive in spacecraft. Perhaps They have come through from another dimension. Perhaps They are demons. No one knows. They are not saying. They have, however, killed huge numbers of humans.

Our viewpoint character is Emerson. She is part of a group of archaeologists sent to investigate the remains of a city that was attacked by Them. It appears to be somewhere in Eastern Europe. Possibly Poland or Western Ukraine, which is decidedly spookier now than when Mohamed wrote it. Most of the team are scientists making various measurements to try to understand what happened in the town. Emerson is more of a humanist, and she has found what she believes to be a diary written by someone during the invasion. The contents of the diary make up around half of the narrative.

The writer of the diary is a middle-aged woman. Her husband was killed by Them. Her two sons were conscripted into the army and taken off to fight the invaders. She has not heard of them since. She hasn’t heard from the army, or anyone in government either. The city is entirely under siege. She is currently living with a much younger man whom she has developed affection for, but she is afraid to express this in case he takes offence.

The number of survivors is very small. They seem to survive by keeping out of the way of Them. They are able to scavenge food from the remains of shops, and even grow vegetables. However, they have to be very careful. Some of the surviving humans are apparently Agents, people who have allowed themselves to be taken over in some way by Them, and who act as spies.

The rest of the investigatory team is dismissive of Emerson’s find. It is not scientific evidence. There is no proof that the diary is genuine. Even if it does date from the days of the invasion, it may be lies. Emerson tries to find some of the places mentioned in the diary, but the city is large and there are few explicit descriptions of locations. Also some of the things that the diarist mentions are strange. What are the Statues? Do they really come alive at night? Why has no one ever heard of them before.

This is absolutely my sort of horror. It is creepy and weird, and doesn’t rely on extreme violence or fountains of blood for effect. It is also excellent use of the novella format. I’m not sure that it could have been sustained for a full novel. But I do hope that Mohamed writes more like this, and that other people put this book on their Hugo ballot.